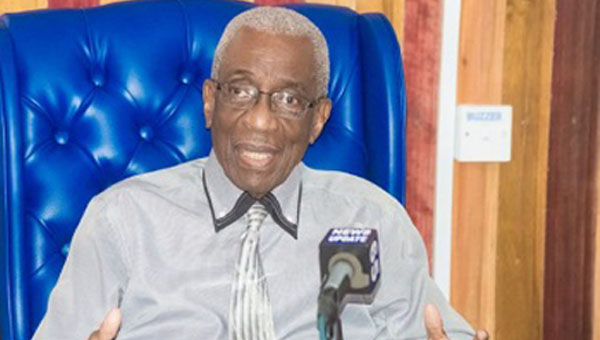 GEORGETOWN, Guyana, Wednesday, June 26, CMC – The Chairman of the Guyana Elections Commission (GECOM), retired justice James Patterson, demitted office, yesterday, one week after the Trinidad-based Caribbean Court of Justice (CCJ) said his appointed was flawed and not in keeping with the provisions of the constitution.

Patterson met with President David Granger, who thanked him for his service over the past 20 years, according to an official statement, issued by the Department of Public Information (DPI).

It said that Patterson had submitted his, on Monday, “thereby rendering that post vacant”.  Patterson was appointed to the post in October 2017.

The CCJ, which is Guyana’s highest and final court, said — in its ruling on June 18, which also validated a motion of no confidence against the government that was passed in the National Assembly last December — that while the Court found the section regarding the appointment of Patterson as GECOM chairman to be flawed, it wanted to emphasize, however, that nothing in its judgment was intended, “in the slightest degree”, to cast aspersions on Patterson’s competence and suitability for the post.

CCJ President, Justice Adrian Saunders, who delivered the ruling, also said that there should not be any suggestion that President Granger had not acted in good faith.

The Court heard that three lists, with a total of 18 nominees for the post of the GECOM Chairman, were submitted for consideration by Opposition Leader, Bharrat Jagdeo, and rejected by Granger.

The CCJ noted that there could be a “reasonable and responsible” manner in selecting the future GECOM chairman, with both the President and the Opposition Leader meeting to agree on the names of possible nominees.

On Monday, when the CCJ met to discuss the consequential orders and costs arising from the June 18 ruling, Justice Saunders expressed the Court’s displeasure at the failure of the stakeholders in Guyana to reach some form of “compromise”, which would allow for fresh regional and general elections in the Caribbean Community (CARICOM) country, as soon as possible.

“It beats me that the Leader of the Opposition and the President and their respective counsel had not met to discuss the issues that confront us,” he said, ruling that main parties will submit their written submissions, “on or about July 1”, and the Court will not give a decision until July 12, in the hope that the parties will meet “repeatedly with a view, hopefully, to agree…on the issues, which are outstanding, that we can give a decision on, or that need to be made”.

“Judgements on submissions will be given on the 12th,” he added.