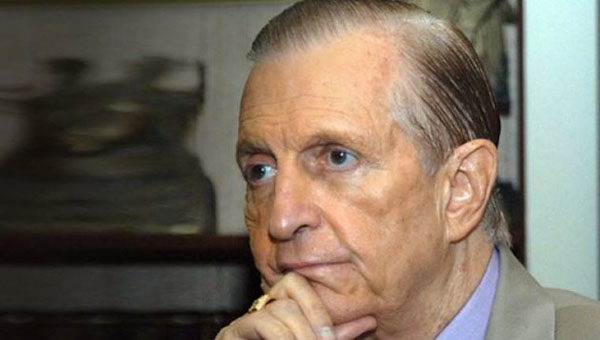 Former Jamaican Prime Minister, Edward Seaga, who died in hospital in the United States on his birthday – May 28 -- was buried, in Jamaica, on Sunday.

KINGSTON, Jamaica, June 26, 2019 (CMC) – Hundreds of mourners, on Sunday, said farewell to former Prime Minister, Edward Phillip George Seaga, who died last month. The Ecumenical Service of Thanksgiving for Seaga, who was 89, was held at the Cathedral of the Most Holy Trinity in downtown Kingston.

The former Prime Minister, who was accorded a state funeral, was lauded for his contribution to Jamaica’s political and cultural development.

In his tribute, Prime Minister Andrew Holness said Seaga was a great man, who was, at times, misunderstood.

“I feel as privileged to be standing in tribute to him today, still in awe, as I was on the first day I met him,” the Prime Minister said.

“He was a visionary, a big thinker, yet he was a pragmatist, he was not a populist, he was not issuing political confectionary. These contradictions gave fodder to misrepresentations and, oftentimes, he was misunderstood,” said Holness, who added that the former Prime Minister had a passion for the poor.

“All his work, from culture to sports, education, justice, the economy, music — everything — has been beneficial to the poor. Today we pay tribute to a great leader, a visionary and a thinker, a man of dignity, order and excellence …..a modern man, an architect, a teacher, a father, a friend, a man for all seasons, a man for all peoples, Holness commemorated.

“Now we lay you to rest Pappa Eddie, but what you stood for lives on. It lives on in the institutions you created and the people you have tutored and mentored….rest well.”

Former Prime Minister, P.J Patterson, said that, while they were political rivals, Seaga was a “titanic warrior”, who had the will to succeed at whatever he did.

“We gather as one people without division, so that one nation can blend all our voices in harmony…..let us now sing the praises of a famous man in our generation – Edward Phillip George Seaga,” Patterson added.

“Our views did not always coincide on a vast range of national issues and policies, but that consideration and that habit of division will not prevent me from paying my humble tribute to a titanic warrior. Seaga was a leader, cultural and sports enthusiast ….. the name of Edward Phillip George Seaga will live on for generations to come – let the nation proclaim his wisdom!”

Also paying tribute was Grenada Prime Minister, Dr. Keith Mitchell, who described Seaga as a Caribbean champion, adding that Grenadians are grateful for Seaga’s role in the 1983 invasion of Grenada, which toppled the government of Marxist revolutionary,  Maurice Bishop, that had overthrown elected officials in a coup.

“There may not have been unanimous support for the course of action taken then, but you were acting in Grenada’s best interest and for that we thank you,” Mitchell noted.

Mitchell further explained that Seaga’s support for Grenada was epitomized by his attendance of the official ceremony for the elected government in 1984, after the invasion, and he remained a friend of the country until his death.

“He created a cultural revolution in West Kingston, that made us the envy of many communities across Jamaica…. I salute and honour you, Jamaica salutes and honours you. No politician has had the impact that you have had on this country……you were not born here, but you renounced your American citizenship and became a total Jamaican through and through. Your name will always live on our hearts. Walk good, my father, my mentor and my friend,” he added.

The body of the former Prime Minister was laid to rest at the National Heroes Park.

Seaga was the only remaining member of the generation of leaders, who drafted the constitution, when Jamaica gained independence from Britain in 1962.

He won a parliamentary seat that year, representing West Kingston and remained in office for over 40 years, longer than anyone in Jamaica’s history.

Seaga, who was Jamaica’s fifth prime minister, also served as the leader of the ruling Jamaica Labour Party (JLP), from 1974 to 2005, when he retired from active politics.

On his retirement from politics, he was an honorary distinguished fellow at the professorial level at The University of the West Indies, and also served as chancellor of the University of Technology, Jamaica.

Seaga, died at hospital in the United States on his birthday – May 28.