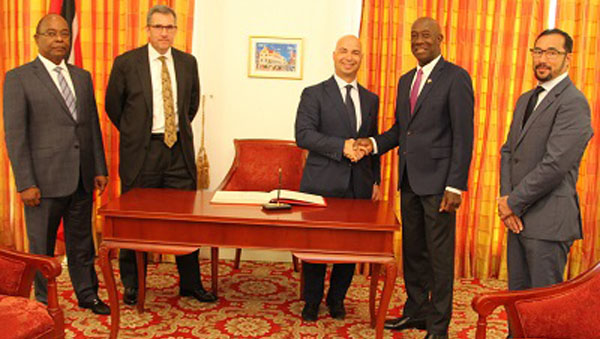 Canada-Based Company Plans To Invest Further In Trinidad And Tobago

PORT OF SPAIN, Trinidad and Tobago, July 18, 2019 (CMC) – The Trinidad and Tobago government announced, on Tuesday, that the world’s largest provider of crop inputs and services with operations and investments in 14 countries, is examining the possibility of executing a multi-million dollar plant upgrade, here.

A government statement said that Prime Minister, Dr. Keith Rowley, met with a high-level executive delegation from Nutrien, the Canadian fertilizer company, based in Saskatoon.

It disclosed that the delegation included Chuck Magro, the President and Chief Executive Officer, and that during the discussions “Nutrien signalled its intention to further their investment in Trinidad and Tobago”.

“Over the next six months, the company will execute a multimillion-dollar plant upgrade as it continues to position itself as a major player in the local hydrocarbon industry,” the statement said, adding that “Nutrien also received an update on the work completed in the local energy sector, to secure the viability of the gas upstream and downstream industry”.

The statement said that both parties reiterated their commitment to working together and building a strong partnership that is mutually beneficial.

Nutrien Trinidad, formerly PCS Nitrogen Trinidad Limited, is the country’s largest ammonia producer and one of the largest nitrogen manufacturing complexes in the world. The company’s business in Trinidad and Tobago accounts for more than 35 percent of its global production portfolio.