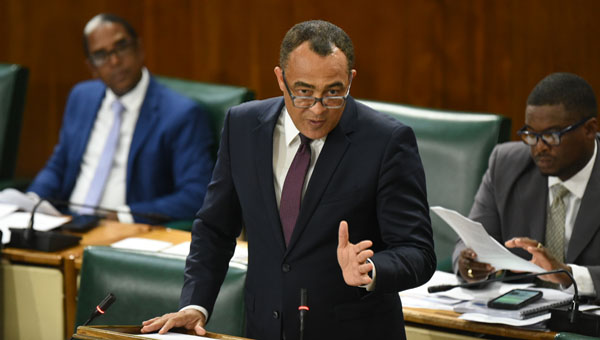 Jamaica's Minister of Health and Wellness, Dr. Christopher Tufton, emphasises a point, while delivering a statement in the House of Representatives, yesterday. Photo credit: Adrian Walker/JIS.

KINGSTON, Jamaica July 24, 2019 — Jamaica has activated its Ebola Virus Disease Response Plan, implemented in 2015, to increase awareness and educate stakeholders, disclosed Minister of Health and Wellness, Dr. Christopher Tufton, during a statement to the House of Representatives, yesterday.

Dr. Tufton informed the House that the Ministry is undertaking specialised training and retraining of relevant stakeholders, including Immigration and Customs personnel, Port health staff, public health departments, clinical care teams and all persons, who may handle specimen.

Also, he elaborated, surveillance at points of entry to the island, through sensitisation and screening, will be enhanced, and clinical protocols for management and infection control practices are being reviewed.

“We are also reinforcing our laboratory response capabilities and preparing isolation areas at our public health facilities. Back in 2015, we had procured personal protective equipment, which were distributed to hospitals,” Dr. Tufton noted.

“We also put in storage emergency stock at the Ministry’s central stores. We are now doing an inventory of these items and additional items will be procured as required,” he added.

Dr. Tufton also assured the public that the current response arrangements are in place to enable an appropriate response, in the event that the Ebola virus disease is introduced to the island.

The Ebola Virus disease, formerly known as Ebola Haemorrhagic Fever, is a rare but severe, and oftentimes, fatal illness in humans. Since 1976, there have been 10 outbreaks. The 2018 outbreak has been protracted and has now extended to the main commercial centre in the DRC.

Last Wednesday, the World Health Organization (WHO) described the Ebola virus disease outbreak in the Democratic Republic of the Congo (DRC) — which started in 2018 — as a public health emergency of international concern.

Also in his statement, the Health and Wellness Minister reported a major decline in the cases of dengue fever, a mosquito-borne tropical disease, caused by the dengue virus.

Dr. Tufton said it is anticipated that there will be an increase in the breeding of mosquitoes during the summer months, including those that carry the dengue virus.

He said that the first few weeks of July have seen the start of activities under the Enhanced Vector Control program, which include: a comprehensive public education and media campaign; home inspections and destruction of breeding sites by 1,000 temporary vector control workers; and island-wide fogging by parish health departments.