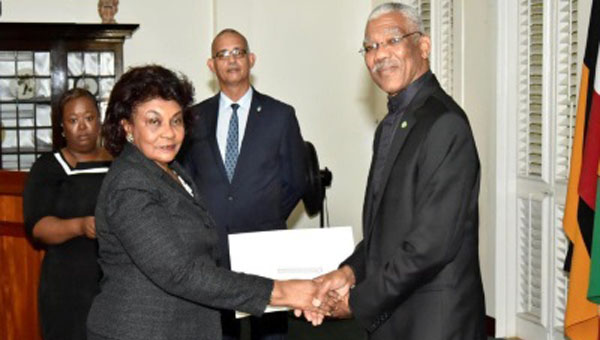 The announcement was made following talks between Granger and Opposition Leader Bharrat Jagdeo, today.

A brief official statement said that the two leaders had been meeting to hammer out a list of nominees “not unacceptable” to the President, as in keeping with the provisions of the Guyana Constitution.

It said that Jagdeo had agreed to the new list and the appointment of the new GECOM Chair was aimed at “ensuring that the Elections Commission could resume its normal functions, with the aim of conducting general and regional elections in the shortest possible time”.

“Justice Singh satisfies the criteria for the appointment, and also satisfies the ruling of the Caribbean Court of Justice (CCJ) for a consensual appointment, supported by both the president and the leader of the opposition,” the statement added.

Jagdeo said he was “very, very happy” with the appointment, noting she had previously declined his invitation to be on a previous list, but today, agreed to be a nominee.

In 2017, she became one of the only three women, here, to be appointed Senior Counsel in the history of independent Guyana. She was called to the Bar in London in 1973 and admitted to the Bar in Guyana in 1976.

Justice Singh served as the Deputy Solicitor General, a Puisne Judge and a Justice of Appeal. During her tenure at the Chamber of the Attorney General (AG), she spearheaded the Modernisation of the Justice Reform Project and is currently serving as the Guyana Police Force’s Legal Advisor.