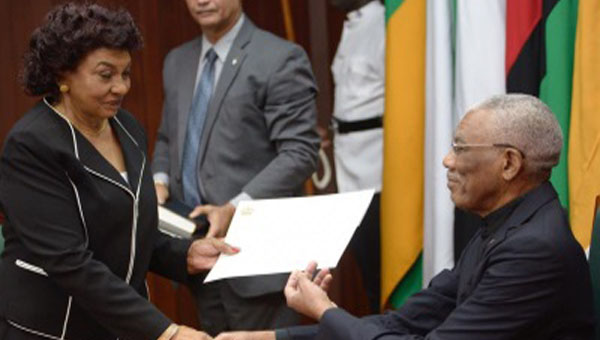 GEORGETOWN, Guyana, July 29, 2019 (CMC) – Retired Justice, Claudette Singh, was sworn in to office, today, as the first ever female Chairperson of the Guyana Elections Commission (GECOM.

President David Granger swore-in Justice Singh, during a ceremony at the Ministry of the Presidency.

Government ministers, as well as Opposition Leader Bharrat Jagdeo, were among guests attending the ceremony that Granger described as “a good day for the Republic of Guyana”.

He told the ceremony audience that he was satisfied with the criteria for appointing the new GECOM chairperson, from a list of names that had been presented by Jagdeo, in keeping with the provisions of the Constitution.

“That is to say, the chairman of the Elections Commission shall be a person, who holds, or has held, the office of a judge of a court, having unlimited jurisdiction in civil and criminal matters in some part of the Commonwealth, or a Court of Appeal or any such court or qualified to be appointed as a judge,” Granger said, adding “free, fair, credible and timely elections are essential elements of a democratic state. The Elections Commission is not a plaything”.

“Its independence is a condition for engendering confidence and ensuring public trust in the electoral system and for the efficient execution of elections,” Granger said, insisting that Guyana’s Constitution mandates that elections should be independently supervised.

“The Commission shall exercise general direction and supervision over the registration of elections and administering of instruction of elections for all the members of the National Assembly,” he said.

President Granger said that the latest appointment fulfils the mandate of the Constitution of Guyana and also satisfies the CCJ, the country’s highest court.

The CCJ had earlier ruled that the appointment of retired justice, James Patterson as GECOM chairman last year, was flawed and had urged, as a matter of the greatest public importance, “the President and the Leader of the Opposition should, as soon as possible, embark upon and conclude the process of appointing a new GECOM Chairman”.

Both Granger and Jagdeo had appointed teams to meet on the matter and, last weekend, the two political leaders agreed to the appointment of Justice Singh, who in 2017, became one of the only three women, here, to be appointed Senior Counsel in the  history of Independent Guyana. She was called to the Bar in London in 1973 and admitted to the Bar in Guyana in 1976.

Justice Singh served as the Deputy Solicitor General and as a Puisne Judge and a Justice of Appeal. During her tenure at the Chamber of the Attorney General (AG), she spearheaded the Modernisation of the Justice Reform Project and is currently serving as the Guyana Police Force’s Legal Advisor.

After she was sworn in, Justice Singh told reporters that her decision to accept the post was dependent on the mutual agreement of both Granger and Jagdeo. She vowed to execute her duties fairly and to the best of her abilities, as she said she understood the challenges of the position.

“I will speak to everybody, and I do not believe in people walking out when there is disagreement. I believe in sitting down hammering out whatever the problem is, not the media will try our problems,” Justice Singh said, recalling that when she served as a judge, she was nicknamed “the Iron Lady”, and there will be no difference now.