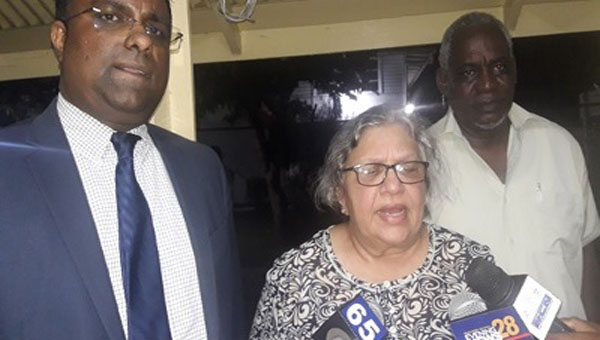 “The issue of house-to-house registration was raised… what should be happening, claims and objections, etcetera; those were all issues that were discussed,” revealed Sase Gunraj, one of the opposition commissioners, aligned to the main opposition, People’s Progressive Party-Civic (PPP-C).

Earlier this month, Chief Elections Officer, Keith Lowenfield, responding to a letter — sent to him by the Private Sector Commission (PSC),and calling for an immediate end to the registration process — said that GECOM’s legal officer, Excellence Dazzell, had, upon his request, advised that, “In light of the judgement of the Caribbean Court of Justice (CCJ) on 18 June 2019, which stated…that every act done by that Chairman (Justice (Rtd) James Patterson after 18 June 2019, would be void.

“However, acts done before 18 June 2019 would be valid, since those acts would have been done on the premise that the appointment was bonafide,” he added.

The PPP-C has been urging its supporters not to participate in the house-to-house registration, and has, instead, called on GECOM to use the existing voters list that expired on April 30.

“I’m satisfied that I have raised the issue and, I believe, dealt with the factors that militate against the conduct of house-to-house registration at this point, vis-à-vis the holding of elections,” said Gunraj, adding that “the conduct of elections as are constitutionally due” was also among matters raised with Justice Singh, who is due to meet with commissioners from the ruling coalition, later today.

The PPP-C is urging the Commission to name September 18 as the date for fresh elections, in keeping with the provisions of the Guyana Constitution, following the successful tabling of the motion of no-confidence against the government of President David Granger, last December.

The CCJ had noted in its July 12 ruling, that while it cannot “establish a date, on or by which, elections must be held”, it also could “not lay down timelines and deadlines that, in principle, are the preserves of political actors, guided by constitutional imperatives”.

But the CCJ said it must assume that “these bodies and personages will exercise their responsibilities with integrity and in keeping with the unambiguous provisions of the Constitution, bearing in mind that the no-confidence motion was validly passed, as long ago as 21st December 2018”.

Under the Guyana Constitution, elections must be held within a 90-day period, following the passage of a no-confidence motion in the parliament or unless extended by the legislative body.