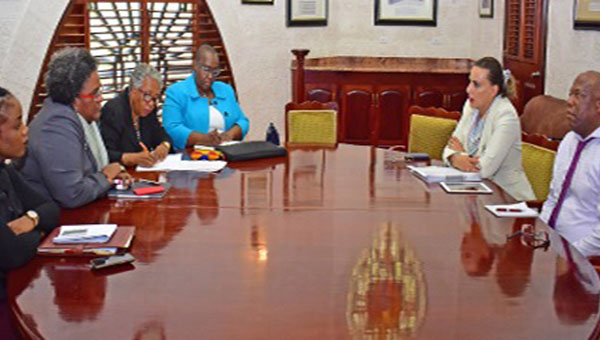 BRIDGETOWN, Barbados, August 9, 2019 (CMC) – The Barbados government says it is seeking to explore a social project, which could result in more than 1, 000 pit-toilets being converted to water-borne facilities, the reconstruction of at least 500 vulnerable homes, and families empowered through education, training and job opportunities.

A government statement said that Prime Minister, Mia Amor Mottley, expressed this desire, during a recent meeting with the Senior Operations Officer from the Department of Public Sector Operations, The OPEC Fund for International Development, Arij Senussi; and Assistant for the Caribbean Area, Nelson Louison.

It said Mottley described the social project as “an opportunity to make wrong things right”, and noted that the venture was critical for the stabilization of the vulnerable population.

“We are trying to raise a grant and very low interest funding, because no one in the 21st century should have to go to a pit-toilet to relieve themselves, but we still have between 4,000 and 5,000 on the island,” she lamented.

The Prime Minister stressed that it was the small things that often made a fundamental difference, adding that Barbados could not go forward into the third decade with unbalanced development.

The statement quoted Senussi as saying that her agency had experience in that area, having executed a similar project in Belize. She noted that such projects could span, from civil works to the psychological needs of a child and other related areas.

She said that the project could be “tailor-made” to suit Barbados’ needs and the next step would be to create a project profile and design the concept.

The senior operations officer explained that the cost of the plan would determine the loan amount.  She also advised government officials to put together a concept with the cost estimation financing request, along with supporting documents.

“We will make a determination from there,” she said, noting it could be done in phases.

“Other areas discussed included the stabilization of roofs; building resilience across Barbados, through the replacement of water mains; and moving overhead cables underground,” the statement noted.