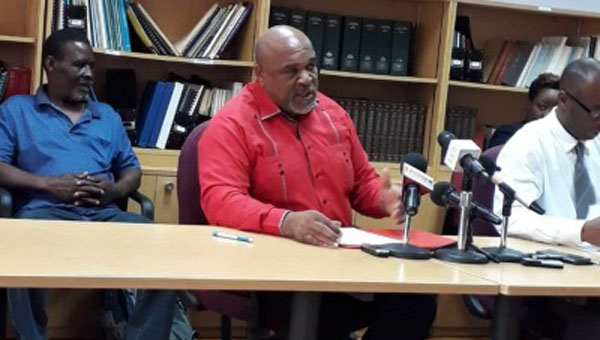 Agriculture, Food and Fisheries Minister, Reginald Austrie, said “This project, if executed properly, will signal a revival of the agricultural sector, from the pre-Maria period”.

Following the passage of Hurricane Maria in September 2017, the Dominica government, with financial support from the World Bank amounting to US$25 million, has sought to implement the five-year DEALCRP project, which has four main components.

“Component one is the restoration of the recovery of agricultural livelihoods, with an amount of some $21 million,” Austrie said, noting that the second component will deal with the restoration of key production infrastructure and institutional, livestock and forestry.

He said US$5.2 million has been budgeted for that component of the program, with the third component, including project management and coordination, to an amount of an estimated US$2.1 million.

“The fourth component will be a contingency emergency response of US$25 million,” Austrie added.

Austrie said at least 4,000 farmers and fisher-folk will receive support from the agricultural project.

“Farmers, to include crop farmers, livestock and fishers as well as canoe and boat builders, will receive support from the project,” Austrie said, adding that to be eligible, the crop farmers must be involved in farming, on a full-time or part-time basis, and crop production should be a major source of their income.

“This time, public officers are included,” he said, explaining that crop and livestock farmers must show legal identification and show proof of land ownership or have a legal document of a lease/agreement for at least three years.

“Fisher-folk must be registered with the Fisheries Division and be owners of at least a 15-foot boat or larger,” Austrie said.

Manager of the Project Implementation Unit (PIU), Kervin Stephenson, said the project is aimed at “restoring our food security base, to ensuring that we have employment back in rural communities and, more importantly, the restoration of our economic base”.

Stephenson mentioned that he hopes, by the end of the fourth year, there will be a significant contribution made in restoration of the sector and, more importantly, the restoration of livelihoods, “because Dominica is still very much dependent on agriculture”.