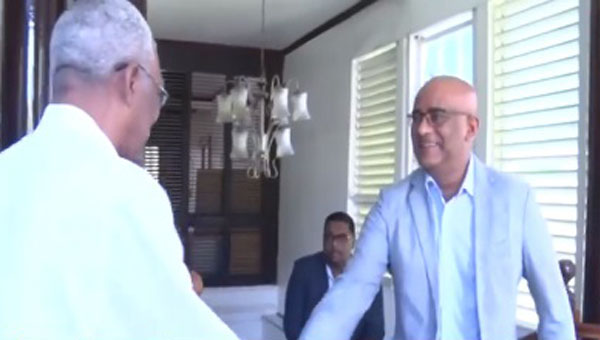 The two leaders met for two hours, on Friday, and following the deliberations, both admitted that there had been no real shifting of original positions, regarding the staging of “credible” elections in the Caribbean Community (CARICOM) republic.

“We have not altered our positions. The government’s position has not changed, that we are pursuing a course that can guarantee a credible list and will be the basis for credible elections; and the opposition’s position has not changed. But we are working towards seeking a common ground, so that the Guyanese people can be assured that we will have credible elections in the shortest possible time,” clarified Granger.

Jagdeo told reporters that “all the discussions were about the elections”.

“It’s early days in these discussions. We used the time to spend clarifying positions on certain issues. So the president laid out his position and I pointed out our views on the matter,” the Opposition Leader explained, noting that there were “several issues on September 18”, the date which the Peoples Progressive Party-Civic (PPP-C) said the elections must be held, in accordance with the Guyana Constitution.

“I shared my views on the resignation of the Cabinet, on the-house-to-house registration and the timeline for that, consistent with the work program of GECOM (Guyana Elections Commission) and the President shared his views on similar matters,” Jagdeo told reporters.

The Guyana High Court will rule next Wednesday (August 14) whether, or not, it will accede to a request by attorney, Christopher Ram, to stop the house-to-house registration exercise, now being conducted by GECOM.

Attorney General and Minister of Legal Affairs, Senior Counsel Basil Williams, argued Monday, before Chief Justice, Roxanne George-Wiltshire, that GECOM had not violated any law, by moving ahead with the registration exercise, and therefore, it should continue.

Both Granger and Jagdeo said that their meeting, next week, would come after the newly appointed GECOM Chair, retired Justice Claudette Singh, is made fully aware of the High Court ruling and meets with her Commissioners on Wednesday.

“We referred to our meeting with the chairman of the Elections Commission, on Thursday, and we feel (that) her request — to be given the opportunity to hear the judgement of the Supreme Court and meet with the members of the Commission — was a reasonable one, and we would like to engage with her, after she has done those two things,” Granger told reporters.