New in Pride
Home / National News / Ontario Premier, Doug Ford, Continuing To Turn His Back On “The People”, Despite New Faces 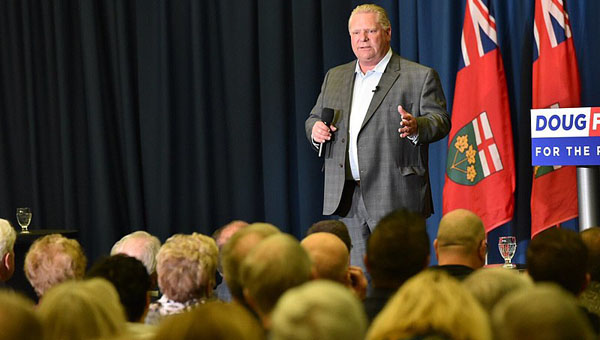 Ontario Premier, Doug Ford, seen campaigning in Sudbury, during the 2018 Ontario general election. Ford’s campaign slogan was ‘for the people’. but his first year in office suggests he’s not paying attention to their anger about his government’s cuts. Photo credit: CC BY-SA 2.0.

Ontario Premier, Doug Ford, Continuing To Turn His Back On “The People”, Despite New Faces

The famous physicist Sir Issac Newton’s first law of motion states that objects in motion will continue in motion at the same speed and direction, unless some external force is applied to change their trajectory. The same principle is often true of government policies as well. These continue in the direction in which they were initially set, until there is a specific intervention to change them.

There are few places in recent memory where this principle is truer than Ontario under Doug Ford, whose campaign slogan was “For the People.”

Despite the chaos of the past few months, featuring a major cabinet shuffle that included the dumping of Finance Minister Vic Fedeli, the demise of the premier’s controversial chief of staff Dean French and statements that Ford’s administration is now “a government that listens,” remarkably little has actually changed.

Several high-profile political appointments attributed to French have been scrapped and others are now under review. The question of how these appointments, which by statute were subject to cabinet approval, occurred in the first place remains unanswered.

The government also backed down on current in-year funding cuts to municipalities, particularly for public health services, in the face of an outcry from local governments, health professionals and others. A reversal on the funding of services for children with autism seems to be underway as well, along with a retreat on cancelling OHIP funding for out-of-country dialysis treatments.

Beyond these specific steps however, the provisions of the province’s April 2019 budget, sweeping omnibus bills pushed through the legislature and a wide array of administrative decisions remain very much intact and in motion.

Even deeper cuts are scheduled for future years — a point highlighted again by recent protests over the government’s 30 per cent cut to the province’s legal aid system.

These moves have included unprecedented interventions in neighbourhood-specific plans, like the city of Toronto’s Midtown in Focus and TO Core initiatives, to systemically eliminate height limits on new developments and remove references to the nature of public spaces in these areas.

The dismantling of programs ranging from energy efficiency to the prevention of toxic pollution also continues apace.

The radical changes made to provincial and municipal institutions similarly persist. The Ontario Child Advocate and the Office of the Environmental Commissioner have been eliminated as independent entities. Toronto City Council stands at half of its pre-election size and the province’s moves to take control of the city’s subway system continue to advance.

No news on climate plan progress
Amid all of this, there has been one notable exception to the province’s policy inertia. Last December, the Ford government introduced a high-profile “made in Ontario” environment and climate plan. 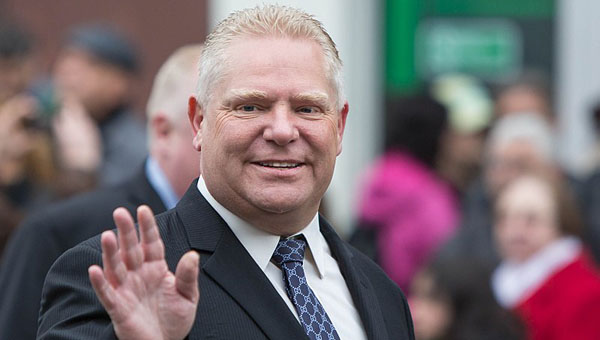 But since then, there’s been little information about the plan’s climate change provisions, including a carbon trust fund and some form of carbon pricing for industry. This even as parts of the Muskoka River watershed and the Ottawa River valley disappeared under unprecedented spring floods and storms, and the premier himself acknowledged that climate change partly caused the disasters.

Instead, despite a widely expected defeat of its challenge to the federal government’s backstop carbon pricing system in the Ontario Court of Appeal in June, the government stated its intention to take its quixotic fight to the Supreme Court of Canada.

The implementation of the federal carbon pricing and rebate system in Ontario was triggered by the province’s termination of its cap-and-trade system for greenhouse gas emissions almost immediately following the June 7, 2018 election. The legal challenges were accompanied by a widely ridiculed requirement that gas stations attach stickers to their pumps, blaming the federal carbon pricing system for higher gas prices.

All of this begs questions about how much the government has actually “listened” and reconsidered its directions. Its internal interpretation of the dramatic decline of its public approval ratings following the tabling of its first budget was that it was facing a “communications” problem, as opposed to the public objecting to the actual contents of the budget.

Senior ministers were shuffled out of their portfolios on the basis that they had been poor communicators of the government’s message, rather than an acknowledgement that there’s something fundamentally wrong with the message that was being delivered to “the people” Ford claims to champion.

Improving communications
The implication is that the government can stay on the same track in terms of the substantive content of its policies. It just needs to improve its communications strategy.

The problem with this approach is that public’s objections to the government seem far more rooted in the increasingly apparent impacts of its actions on health care, education, land-use planning, social services and other areas affecting the everyday lives of Ontario residents than failures to communicate effectively.

These impacts have become all too real as, for example, as teachers get laid off across the province. Individuals with complex out-of-hospital health-care needs have seen their arrangements thrown into turmoil with the dismantling of the Local Health Integration Networks.

If the government continues on the fiscal and legislative trajectory set in motion over its chaotic first year, those impacts can only become more severe and widespread.

A failure to change direction more substantively than the marginal shifts seen so far could be a fatal and unrecoverable error on the government’s part.

Unless the Ford government can demonstrate that it can truly listen to the people, adjust its trajectory, consider real evidence regarding the consequences of its choices and demonstrate some administrative competence, Ford Nation’s rule will be a one-term phenomenon deflected, like Newton’s law, by the external force of an angry electorate.

The only remaining question will be how much damage will be done to the infrastructure and services on which the province’s residents depend in the meantime.

Mark Winfield is a Professor of Environmental Studies at York University, Canada.