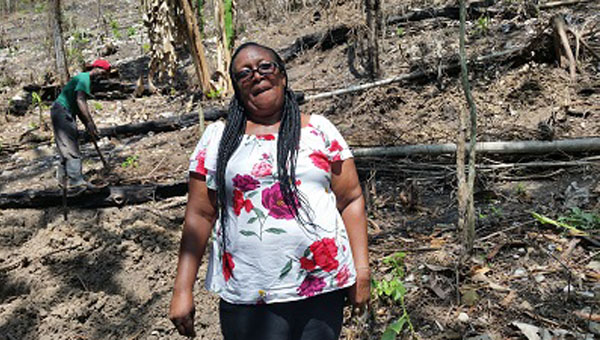 KINGSTON, Jamaica, September 4, 2019 (CMC) – Small farmers in Jamaica are turning to technology to mitigate the impact of climate change on their livelihoods.

With the country now in the grip of a prolonged drought, over the past few months farmers have also been struggling with record temperatures and increased bush fires.

In that regard, the Technical Centre for Agricultural and Rural Cooperation (CTA) has partnered with the Rural Agricultural Development Authority (RADA) and the Met Office to train farmers in adopting climate-smart agricultural practices.

It is part of the CTA’s initiative, ‘Accelerating the Uptake of Climate Smart Agriculture’, to help increase climate-smart practices among 50,000 smallholder farmers across Africa, the Caribbean and the Pacific.

Over the past week, the Met Office has been training small farmers in the parish of St Mary, to use weather advisory services, via their mobile phones, to prepare for droughts and possible floods.

“The idea behind the met service working with RADA and the farmers is to provide the information, way ahead of time. We know that there are more intense hurricanes, more major flooding, (and) extreme heat,” said Glenroy Brown, Climate Specialist at the Met Office.

“This was one of the hottest summers we have ever seen in Jamaica, with temperatures at a record high, 102 degrees Fahrenheit or 39 degrees Celsius,” he added.

The Met Office will now customise the regular daily weather forecasts to suit the needs of the farmers in the various parishes.

“The community forecasting is a one to five day forecast for any district, so no matter where your farm is, where you live, we can provide that forecast for you.”

“We have introduced a second climate-smart, early-warning system. So we have a system now that can tell you where the drought is, how long the drought will last; it will tell you where the flash flood is, how long the flash flood will last. It will tell you if Jamaica is under a hurricane warning or a flash flood warning. And all of that information can be on your mobile phone,” he told farmers, adding “right now in Jamaica, we have over 100 automatic weather stations and over 200 manual rain gauges, across the island.

Brown reminded the farmers of the likely impacts of the changing weather patterns, namely dry rivers and reservoirs, water and food shortages, and an increase in bush fires.

He says in St. Mary alone, there were over 300 bush fires in two months. In July the fire department recorded over 140 bush fires.

The Met Office is currently working on a new tool, which is expected to be introduced in January, that will be able to forecast bush fires. 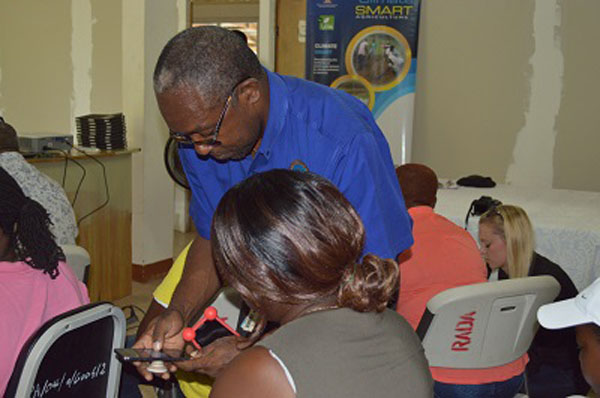 Glenroy Brown shows a farmer how to access weather updates on her smart-phone. Photo credit: CMC.

“We’re looking at the vegetation, providing that this is not something that is set by individuals. But what we’re trying to do is work with the fire department, and the fire department will go into these communities, if we say that they are likely to experience outbreaks of bush fires (and), to tell these communities do not light any fires,” Browne said, adding “the environment right now is too perfect for bush fires.”

Other initiatives have also been developed to assist farmers adapt to changing weather patterns.

“We have tools like the Agro Met Bulletin, it would tell you the farmers and extension officers what happened over the last three months [and] what is expected over the next three months. Our rainfall summary, we look at each month, how much rainfall and compare that to what we normally get over a 30 year period,” he noted.

Brown said that the initiative also provides for farmers who do not have access to the internet, and they have therefore entered into an arrangement with the mobile service providers on the island to provide text messages free of charge to the farmers.

He hailed the drought forecasting tool as one of Jamaica’s success stories, as it has been adopted by other countries in the Caribbean and Central America.

“In 2014-2015 Jamaica experienced one of the worst droughts in history and we introduced this tool to our farmers … and nationally agricultural production went down by 30 per cent.

“But … what we did was to sample 500 farmers and look at farmers who were exposed to training like this, that they were getting the messages on their phone, they were at training sessions like this so they had access to climate smart information.

Farmer Joan Johnson has been growing multiple crops including plantain, bananas and cocoa. She told the Caribbean Media Corporation (CMC) she welcomed the training, as she has been affected by drought and bush fires.

“Normally this time of year we get a lot of rain, but we might not get it this trip so I don’t know,” she said, adding “I live off my farm. I supply the cocoa and the plantain and I don’t have any right now. They called me yesterday and I said I don’t have any.”

But she remains optimistic. “It’s rough but by the help of the almighty I’ll get through it.”

CTA Programme Coordinator, Communications and Marketing, Bertil Videt, told the farmers and agriculture officers he was impressed with the project here. 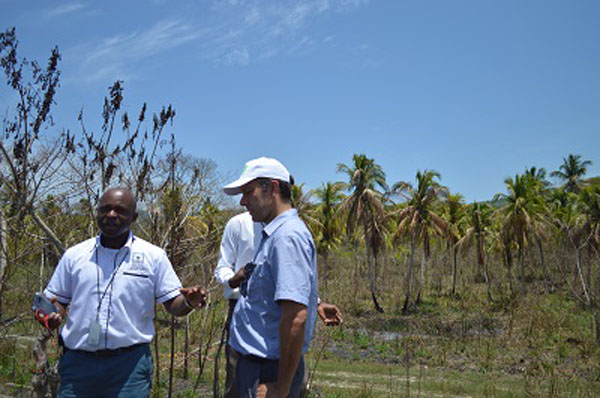 “CTA promotes the use of digital technology that can help farmers increase productivity. We support the use of big data delivered to the fingertips of farmers often as it is happening.

“And for you, with SMS messages, in other places by using an app, in other places working directly with extension agents who get information and data that might come from satellites or from drones. So in this respect the work that I’ve been seeing here in Jamaica is very impressive and fits very well into our overall mission for ensuring food security in the world.”

“What we really want to do is to change the mindset of the farmers. We want to help them to develop their capabilities in implementing different measures that will help to reduce runoffs, (and) fire issues.

“As I’m speaking right now we are seeing dry rivers within our parish … and these are a result of human activity in the hilly interior. There are also some fire issues that we have been experiencing and this is also as a result of the continuous dry spells that we [have been] faced with over the past few months,” Luke stated.

Similar projects are being conducted in the parishes of St Thomas and Portland.