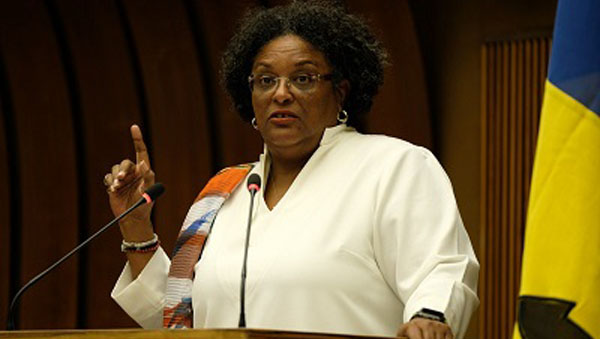 “Climate Change Will Be Defeated. Humanity Has No Choice,” Says Barbados PM, Mia Mottley In Geneva

GENEVA, Switzerland September 10, 2019 (CMC) – Barbados Prime Minister, Mia Mottley, called on the international community, yesterday, to summon-up the political will, as well as a multilateral approach, to deal with the impact of climate change.

The Prime Minister elaborated that new institutional structures are needed, that will allow substantial more resources to be raised for Small Islands Developing States (SIDS) in building resilience, in a changing global environment.

Delivering the United Nations Conference on Trade and Development (UNCTAD) 16th Prebisch Lecture, here, Mottley suggested there was need for a moral obligation to deal with the existential threat of climate change, as had been the case when the global community stood up against colonialism, slavery, the insidious threats of terrorism and other issues.

“But, what will it take for us to get our leaders and countries to protect an entire world against today’s existentialist threat to our own survival as living beings on this planet,” Mottley said, asking when will the political will be formed, within countries and across international institutions, to do what is right to create the policy space “and not just hand out aid that will allow our countries to plan and to protect what we have, and propel our people to prosperity”.

Mottley, the first Caribbean person to deliver the Prebisch Lecture, said this policy flexibility will often be of minimal cost to the developed world, in terms of the market access they grant, but will give opportunities and may even have tremendous transformative effect for us, in the developing world.

“In many instances, it is the difference between life and death. Regulatory tyranny is the new weapon being used to maintain dominance in today’s world and enhance so-called competitiveness. Rules are made and changed without our participation in many instances. It’s a game of football, where the goal posts keep changing,” noted Mottley.

She said the battle against harmful taxation, for instance, while appearing worthy from the outside, is practiced in a manner so devoid of the most basic of legal tenets and social justice, laws of natural justice as old as humanity itself.

“Countries cannot sign up to international treaties, charters, commitments and declarations and then treat them as if they are not meaningful or real; that they only apply to others or when it is not inconvenient to the powerful. If they are treated as hollow documents, the international order is de-legitimised and diminishes in relevance”.

The worthiness and pursuit of this reform is unquestionable, yet this remains decades after, unresolved, she pointed out

“Let us put to bed these things that we have been fighting for that are legitimate and worthy. Let us move beyond them to reach the other important issues, such as the poverty and inequality, the boundary of genetically-modified foods, the future of work and the rise of robotics and other disruptive technologies. The failure to put these issues of representativeness to rest, reeks of the same patronising attitude that sustained colonialism for too long.”

She added that the problems the world faces today, can only be defeated multilaterally.

“In the same way that weak links attract financial crime, an international order that is not inclusive, not strongly rooted in fairness and moral legitimacy, will fail to halt and reverse climate change. In this most global of battles, all are needed to fight — even the invisible are indispensable.”

Mottley, the first woman to head a government in Barbados, said that she fundamentally believes that like with everything else in life, “we must claim ground, secure it and move forward.

“We do not always move in a straight line. And often, we need collective partnerships, we need new voices to inspire and to influence. We need to set our priorities and work, assiduously, to make them happen.”

She said that the first priority should be the revival of the nexus of trade and development, noting that at present, trade policy — with its focus on the removal of local protection, reliance on transport logistics and the multinational corporate ownership of technology — stands in conflict with climate policy and its focus on the building of local resilience and food security. 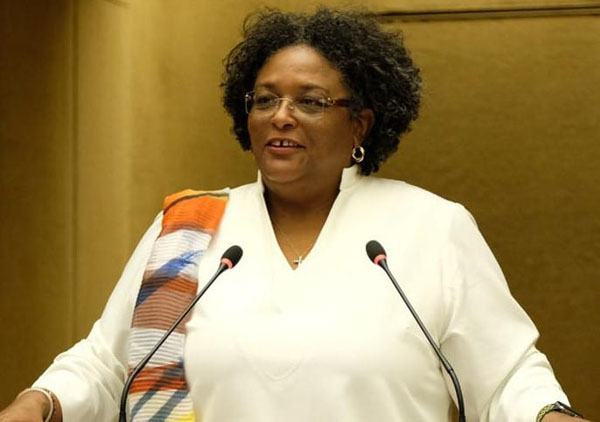 “That fresh food is not just an issue of resilience against hurricanes, but resilience, too, against the ravages of poor nutrition and against spiralling health costs. Yes, we need a revival of the nexus of trade and development,” she told the audience.

Mottley said any focus on economic sustainability, must bring into focus the blue economy, adding that the value of the seas, be it from fisheries, extraction of minerals, absorption of carbon, adds materially to the economic base of all, but especially of island states.

“In my own country, our seas are more than [400] times our land. Our seas are the gateway to the Caribbean, Central America and the Pacific. We think of ourselves as islands, but we are as much seas.”

“The value of this blue economy comes not from just saying so, it requires recognition yes, but also measurement, careful conservation, cooperation and enforcement of international law — and significant investment.

“The blue economy is an opportunity, but one not grasped, could quickly turn to a source of loss and damage. Coastal zone management is increasingly expensive as sea levels rise, the bleaching and death of reefs is impacting fisheries, untreated run-offs are contributing to the rapid spread of sargassum and other blights on our beaches,” the Prime Minister said.

In her presentation, Mottley said SIDS needed a new colloquium on insurance and investment, noting that in a climate disaster, insurance mechanisms pay out budget support fast, but, now, the resources are too small.

She argued that self-insurance cannot work for those on the front-line of climate change.

“Those on the front-line will not be able to afford the premiums for the rising and correlated threats of loss and damage, caused by climate change. We need a new settlement, where insurance mechanisms are used to pay out 10 to 50 times more than currently, and the premiums are paid by those who contributed to climate change.”.

The Barbados Prime Minister said linking contributions to loss and damage funds, to those responsible for the stock and growth of greenhouse gases, will not only provide the financing, but would provide the kind of changed incentives that we need to bring a halt to climate change.

“As long as there is distance between those who suffer from climate change — the front-line — and those that contributed to it, and their bottom line, climate change will continue. We need to close that gap, faster.

“We can build better, we can build to withstand a Category 5 hurricane or cyclone, but it is expensive. It is expensive to put all utilities underground, to safeguard our slopes, river banks and coast lines. Too expensive for the debt to finance these investments to sit on the balance sheets of small developing countries.”

She said there was need for new institutions, like what is being proposed by the St. Lucia Prime Minister, Allen Chastanet, “or other institutions, with new governance structures, that will enable these investments to lift countries, regions and cities, and not sink them in debt”.

“The gap between those suffering and those contributing may not be closing fast enough, but it is closing at a rate that many do not appreciate.”

Prime Minister Mottley warned leaders that the young generation was no longer prepared to sit, idly by, and allow climate change to severely impact their future livelihoods.

“Against this reality, not projections, younger and younger people will rise up, for it is their lives that we are sacrificing on the altar of greater profits and convenience,” she said, adding “we must work to mobilise the young people of the world to claim their future”.

“If they can coalesce into a powerful global coalition, not constrained by geographical boundaries or any other divisions, our young people, in particular, will require of us the kind of domestic policy changes and priorities that will assure them of future, and one for their children and grandchildren. We are already seeing the reclaiming of real power by some of these young people.”

Prime Minister Mottley said that there’s justification for the optimism of the youth, saying “we must acknowledge that there are many more countries, today, taking the issue of climate change seriously and have made contributions to the efforts to finance the building of resilience and measures to adapt to climate change.

“More is needed. More change of behaviour is needed. And the route to change is heavy investment in the science and technology of mitigation, adaptation and, also, reversal. These investments will be made. Climate change will be defeated. Humanity has no choice. The questions are not if, but who will solve it, how, when, and, will it be soon enough for the rest of us?”

She predicted that the country or countries that win the technological race to beat climate change, will become the most powerful nations in the world.

“That is the prize. Just as the prize for winning the race to the moon was the technology spin-offs that led to unrivalled economic and military prowess. Which nation, or nations, will take on the ambition of solving climate change? Who will call the world’s best scientists to the task?

“The truth is, we are sure it will not be those who deny the very existence of it, but I am equally confident that there are many, who can summon the will and collaborate across the scientific communities of the world, to solve this — to solve this gravest of threats to humanity,” she predicted.