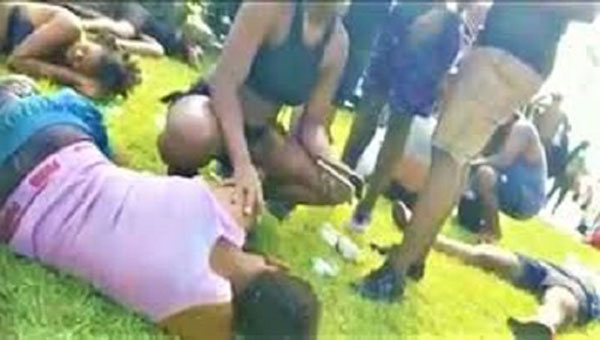 This scene from a video, posted on social media, shows a number of young people passed out at the Hasely Crawford Stadium, following a party.

PORT OF SPAIN, Trinidad and Tobago, September 11, 2019 (CMC) – The Trinidad and Tobago government and its police said, today, they were concerned at the proliferation of a new drug, labelled “the Zesser Pill”, that has been blamed for causing severe, adverse, physical and mental behavioural reactions in users.

The Ministry of National Security, in a statement, said that it is aware of the recent information, circulating in the print and social media, about the availability of the drug that is being sold for as much as TT$100.

“This drug has been attributed to causing severe adverse (physical and mental) behavioural reactions in users,” the Ministry said in a statement, quoting National Security Minister, Stuart Young, as advising “that the chemical composition of this drug has not yet been verified by the Trinidad and Tobago Forensic Science Centre (TTFSC), but investigations are underway”.

“The Ministry of National Security continues to urge the public to avoid the use of any substances with psychoactive properties, in the interest of their health, safety and wellbeing,” the statement added.

Speaking at the weekly Trinidad and Tobago Police Service (TTPS) news conference, Acting Superintendent, Wayne Mystar, disclosed that law enforcement authorities are aware of the drug and that, “based on our intelligence, it is a combination of ecstasy and cocaine”.

“It is in a powder form and it is also designed to look like sweets,” he said, adding “we are critically concerned about it, and we are doing all in our power, to get that dangerous drug off the street.”

Mystar said that the police are seeking to cooperate with the Ministry of Education to assess a program, “because we are realising that because of the infiltration of gangs into schools, the drug may well find itself within the schools”.

“So that is something of concern to the TTPS and we are looking into that seriously,” he said, adding, that based on intelligence, the drug is circulating within parties and at schools.

“We are doing our investigations, but what we want to advise principals …if you see something, say something, that is our mantra. We are asking parents to get involved to educate their children about accepting these things from strangers and, as it relates to gangs trying to infiltrate, we have a partnership with each school…to provide strategies that would keep a high security blanket across our nation’s schools,” he added.

Anti-substance abuse activist, Garth St. Clair, recently warned that the video, posted on social media, showing a number of young people passed out at the Hasely Crawford Stadium following a party, was troubling and urged young people to stay away from the drug that could kill them.

St. Clair said that the drug takes a long time to leave the body’s system, thereby prolonging the effect of heart attacks, paranoia, strokes, seizures, coma — and even death.