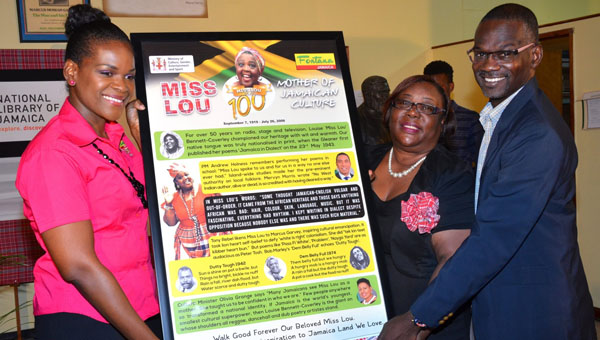 KINGSTON, Jamaica September 19, 2019 — The National Library of Jamaica (NLJ) will be staging a series of activities, between September 1 and December 10, to commemorate the 100th anniversary of the birth of the late cultural icon, Dr. Louise Bennett Coverley, affectionately called ‘Miss Lou’.

These events are being hosted as part of the 100 days of celebration to honour Miss Lou, who is widely regarded as the “Mother of Jamaican Culture”.

The initiative is being spearheaded by the Ministry of Culture, Gender, Entertainment and Sport.

Speaking with JIS News in a recent interview, National Librarian at the NLJ, Beverley Lashley, listed several participating agencies and institutions, including the Jamaica Cultural Development Commission (JCDC), the Bureau of Gender Aﬀairs, and the University of the West Indies (UWI), Mona Campus, which will also stage several events throughout the period.

“We are well placed to be part of these initiatives, which are happening. Most of the activities that we will be engaged in, between now and December 10, will showcase Miss Lou,” she said.

Among the planned activities by the NLJ is the “Miss Lou Travelling Exhibition”, curated by the agency. The exhibition, to run from September 2 to December 10, will be showcased across the Jamaica Library Service (JLS) network.

Locally, the UWI will host the annual Walter Rodney Lecture in Honour of Miss Lou on October 17; and the Declaration of Louise Bennett Park on September 26.

There will also be public consultations on Language Rights in Jamaica, hosted by the UWI at the Mona campus, throughout the months of October and November.

Lashley also disclosed that the NLJ will be launching a Miss Lou Scrapbook on October 11, during its annual observance of Legal Deposit Day.

“We are celebrating 15 years since the Legal Deposit Act was passed in 2004. At that event, we are going to launch the Miss Lou Scrapbook. That scrapbook is every article that was published in the Gleaner about Miss Lou, and we will be launching it on our Legal Deposit Day,” she said.

Schools will also join in the celebrations, with a Schools Heritage Week Celebration, between October 20 and 25.

The Ministry will be hosting 16 days of activism to highlight issues, underpinning gender-based violence. The island-wide initiative will be held from November 25 to December 10.

A Miss Lou Culture Day is to be held at the Louise Bennett Coverley Primary School in Gordon Town, St. Andrew, on December 6. This is to be followed by an island-wide Miss Lou Celebration in Schools on December 10.

The celebratory activities will culminate with a symposium on Language rights and the Jamaican language at the UWI, Mona, also on December 10.

Several celebratory events are also to be held in Canada, where Miss Lou spent the last decade of her life.

One such event is the Miss Lou at Bathurst Heights Secondary School Film Screening and Panel Discussion at Founders College, Toronto, on September 17. There will also be the Miss Lou Celebration, Canada, which will be held on September 19 at the Harbour Front Centre, Toronto.