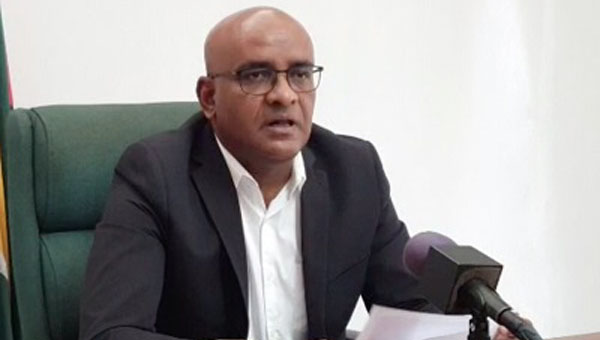 GEORGETOWN, Guyana, September 20, 2019 (CMC) – The Leader of the main opposition — the People’s Progressive Party-Civic (PPP-C-C), Bharrat Jagdeo, has expressed disappointment with the end of February timeline presented by the Chairman of the Guyana Elections Commission (GECOM) on Thursday.

During a press conference , Jagdeo said while he is disappointed with the timeline, he is still confident in the Chair of the Elections Commission and is hoping that the President will set a date for elections in February .

“We hope the date is in February, itself,” Jagdeo stated, as he expressed that he still has “great faith in the fairness and impartiality” of the Chair of the Guyana Elections Commission.

Jagdeo called on his supporters not to disparage the Chair, stating that she is relying on a GECOM Secretariat that is “unreliable”.

The Opposition Leader, who led a protest against the President, yesterday, said he and his party intend to keep up the protests until the President names an election date.

“We will target Granger. We will target the person acting illegally, so Granger, wherever he goes, will be met with protest and disruptions that will say to him, we will not tolerate a dictatorship in this country,” the opposition leader said.

Meanwhile the Brooklyn, New York-based Caribbean Guyana Institute for Democracy (CGID) has strongly condemned what it called the “nefarious interference” in the internal affairs of Guyana.

This is in response to a statement, issued on Thursday, by the envoys of the United States, United Kingdom and the European Union, that said Guyana’s ruling APNU+AFC coalition government is in breach of the country’s constitution, because fresh elections were not held by September 18.

CGID President, Rickford Burke, a Guyana-born international law consultant, told the Caribbean Media Corporation (CMC) that September 18, 2019 was “an arbitrary date fixed by the main political opposition PPP-C”, asserting that “it has no basis in law”.

“CGID condemns this blatant breach of Guyana’s sovereignty by the US, UK and EU, as well as deplores their nefarious interference in Guyana’s internal affairs,” he said.

“We also strongly denounce their apparent coordination with the opposition, which can potentially engender political instability and undermine our democracy.”

But the envoys said they “deeply regret that, by surpassing September 18, the government is currently in breach of the constitution, following its failure to adhere to the decisions of the Caribbean Court of Justice (CCJ) on June 18 and its subsequent orders.”

“This situation comes at great cost to the people of Guyana,” the diplomats added. “The prevailing political uncertainty undermines Guyanese institutions, compromises economic opportunities and delays development, across all areas, including infrastructure, education, health and social services. It also hinders our ability to support Guyana’s development needs.

“We, therefore, call upon the president to set an elections date, immediately, in full compliance with Guyana’s Constitution,” Lynch, Quinn and Cantó said.

But Burke said it is “grossly hypocritical for Missions of the United States and the United Kingdom, particularly, to presume to lecture the Guyanese government and people about constitutional compliance, when their individual governments are currently being challenged in court for violating their nations’ constitutions.