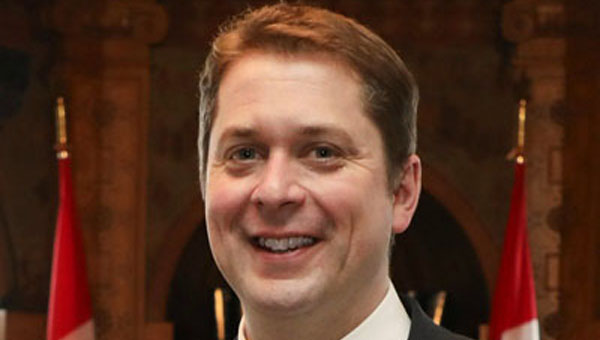 Canadian Conservative Party Leader, Andrew Scheer, recently hurled a blackface grenade into the election campaign, showing 18-year-old pictures of Prime Minister, Justin Trudeau, in costume – one in blackface – six days after the election was called. His intent, clearly, was that the shrapnel would shame Trudeau, on the international stage, and push him down in the polls. It did. Photos Andre Forget/OLO.

How long is the Canadian media going to continue skimming the surface issue of blackface, without plumbing the depths of the real story of anti-Black racism, race and color prejudice, and white privilege in what is supposed to be a multicultural country?

Conservative Party leader, Andrew Scheer, hurled a blackface grenade into the election campaign on September 17, showing 18-year-old pictures of Prime Minister, Justin Trudeau, in costume – one in blackface – six days after the election was called. His intent, clearly, was that by the grenade exploding on the pages of TIME Magazine, the shrapnel would shame Trudeau, on the international stage, and push him down in the polls.

Since then the media has allowed Scheer, with white privilege, to go snickering and smirking into a corner, no questions asked. Where are his party’s proposals for anti-Black Racism and a truly multicultural Canada? When is he going to be called to face the music, or the television cameras, for that matter?

More than a week later, the media has also not put the real questions to Mr. Dress-Up Justin Trudeau. The Liberal Party leader, who has displayed a penchant for costumes, has not been asked for his vision or the details on a Canada, where Black people are simply Canadians, like anyone else.

Must this remain in the shallows? Can’t Canadian reporters see the multicultural forest for the trees of blackface? There was a glorious opportunity in Brampton, on Sunday September 22, when Trudeau spoke against the backdrop of the most diverse grouping ever seen on a political stage in Canada.

But no. Nothing. Nada. Zilch!

Waiting on Trudeau we must remind him of the Rastaman’s observation, “Hairy face don’t make hairy heart.” Trudeau used the Brampton occasion to attack (for the first time?) Conservative Party positions more forcefully than we have heard before. He repeatedly gave clear examples of opposing postures and positions between the Liberals and Conservatives. It was the sound of a man waking up after a party. But he did not give specifics of anything on the Black or visible minority file.

Nor did the media ask!

Given Canada’s history with racism, immigration, multiculturalism, diversity etc., must the just society of Pierre Elliott Trudeau’s dreams remain but a fleeting illusion?

Justin Trudeau was wide awake when he signed on to the UN Decade for Persons of African Descent, after Conservative Prime Minister, Stephen Harper, denied a UN expert group’s request to allow them to visit Canada for a survey in 2015.

Trudeau has also started putting money (pittance though it may be, late though it may be) into matters of importance to Black communities. Trudeau has begun promoting equality for Black Canadians, including the launch of his anti-racism strategy earlier this year, with a budget of CDN$45 million, of which $30 million was directed to community programs that fight against racism and discrimination.

However, Black organisations in Ottawa have been lobbying the Prime Minister, through his close advisors, for at least two years. But the Black Agenda is not really on the minds of the Liberals, nor the Conservatives or NDP, for that matter. Neither of those other parties has agreed to come to the table and discuss their plans. People cannot be faulted for thinking it is because they have none.

Prime Minister Trudeau had no difficulty ordering a Cabinet of equal male and female members. What is the difficulty then, with ensuring he has Black candidates, Black consultants, and Black advisors in, and outside, the Prime Minister’s Office, and giving them equal status around whatever table they are sitting at? Maybe he is waiting for the right timing…

The fact is that with the shining exception of Brian Mulroney’s Progressive Conservative government, Black Canadians have remained beyond the fringe. Former Prime Minister Mulroney made more than a dozen Black appointments to Federal Boards and Commissions, including the first and only Black Chief Justice of the Federal Court, Justice Julius Alexander Isaac; the President of the Canadian Advisory Council on the Status of Women, Dr. Glenda Simms; and the Commissioner of the Federal Public Service, Gilbert Scott.

Apart from that, progress for Black Canadians, where it has existed, has been all at the hands of the Liberal Party, starting with Justin’s father, Pierre Trudeau. But, at best, it has been tar-slow, anaemic and lethargic. This is largely due to the frustrating barriers, displayed by the bureaucracy, and the fact that the laws and regulations around the issue are largely confined and circumscribed by the Official Languages Act.

To be clear, the Bilingualism and Bi-Cultural Commission of the late sixties produced two national policies, one on language which reflected “the two solitudes” of English and French, and one on culture/color, which reflected the growing diversity of the population, beyond English and French. But Multiculturalism was only allowed to exist “within a bilingual framework” and while the Official Languages Act was proclaimed in 1969, the Multiculturalism Act only became law in 1988.

On September 27, 2005, almost 14 years ago, a new Governor-General was proclaiming the end of the era of two solitudes of English and French Canada.

“We must eliminate the spectre of all the solitudes and promote solidarity among all the citizens who make up the Canada of today,” Michaelle Jean, Canada’s only Black Governor-General was saying.

Regrettably, as in some of the noblest aspirations of former US President Barack Obama, we have not quite reached there yet. And so today, with an absolute absence of gravitas or vision in national discourse, we are being strung out behind blackface, instead of Black progress.

And the absence of Black voices from opinion columns and news-talk television continues to be a hindrance to real progress. How many journalists even knew the origins of blackface? How many know the 60-year-old history of Blacks and visible minorities lobbying for a place at the table and a place in the Canadian sun — report after ignored report?

Maybe he has another grenade up his sleeve for a week just before the polls. But we must call out the media for giving him a free run with his dissing of real Black issues. The same is true for the other parties.

Ewart Walters, CD, MJ, is an author, journalist, and former diplomat and editor-publisher of Ottawa’s Black community newspaper, The Spectrum.