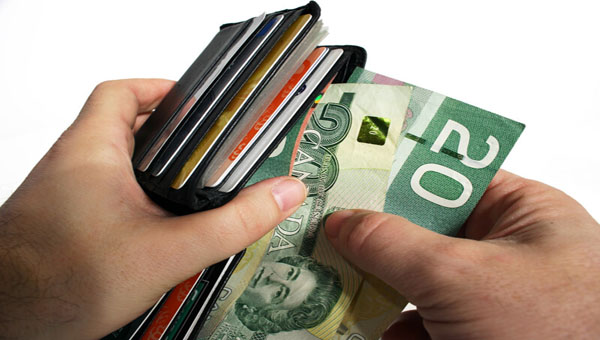 Will the tax promises from the Liberals and Conservatives put more money in your pocket? Photo credit: (c) Can Stock Photo / cybernesco

CANADIAN POLLS: What Election Tax Promises Will Mean For Your Wallet

Beware of politicians’ gifts, especially during election campaigns. Most political presents involve increased spending, but a growing list of promises have to do with changes to taxation.

The Conservatives and Liberals, the main contenders in this federal election, seem to be running even in the polls. They are also seemingly tied when it comes to the price tag of their tax promises.

One of the battle lines that seems to be emerging is which party can convince Canadians they are the best stewards for prosperity, and taxation is one tool politicians think they can use to influence the economy and make life fairer for Canadians.

So, not surprisingly, the two main parties have issued a flurry of promises regarding tax changes designed to reduce tax burdens generally and reward certain desirable activities. Both sets of tax changes currently have a net cost each of $5–6 billion.

Forecasts are tricky
It is always tricky to forecast the net effect of a change since the pace of economic growth will always affect the final tax take.

To help readers understand the current state of the proposed tax changes by the Tories and Grits, I’ve prepared this cheat sheet to stick on the fridge. It will likely change over the next few weeks, so I added some lines to allow additions … I expect no deletions. 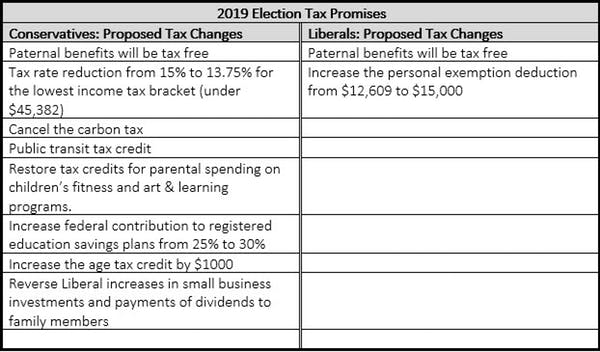 At first glance, it would seem the Conservatives offer the more comprehensive and potentially more generous forms of tax relief across a broader range of recipients. But let’s delve into the proposals and see.

Both parties will eliminate the taxation on parental benefits, and the cancellation of the carbon tax by the Conservatives aligns with their long-running view that Pigouvian taxes, which are similar to sin taxes on goods viewed as potentially harmful to society, can be regressive, increasing costs for lower-income households and small businesses.

The Liberal promise to increase the personal exemption is quite far-reaching, especially because they propose to increase the exemption annually to 2023. The net impact of increasing the basic exemption is to focus the tax reduction on lower and middle-income households, limiting the amount of benefits to high-income taxpayers.

In contrast, the Conservative proposal to reduce the tax rate on the lowest tax bracket tends to spread the benefits across a broader group of Canadians. Even high-income households benefit from the Conservative tax cuts. 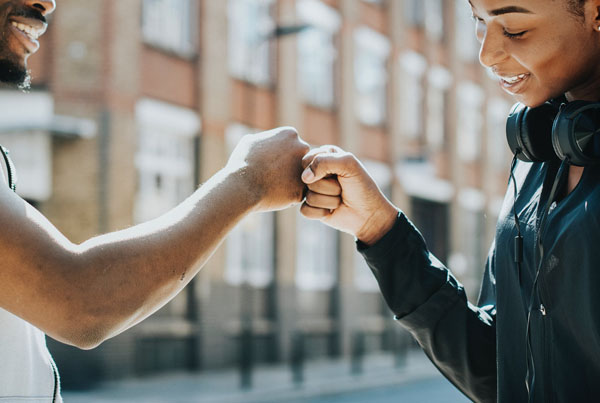 However, both approaches do focus their benefits on lower- and middle-income Canadians so, really, not much difference exists.

Tax credits
The Conservative proposals include tax credits for selected expenditures deemed socially desirable. Since a tax credit provides a direct reduction in taxes owed, politicians can direct the tax relief to specific groups, hopefully winning their support at the polls.

Technically, economists term a tax credit a tax expenditure because it represents governments voluntarily reducing their tax revenues. For example, the age tax credit in 2019 is projected to cost about $4 billion, which represents revenue that must be found elsewhere in the budget.

The other more popular term for a tax expenditure is a tax “loophole.” We normally see loopholes as devices used by the wealthy to avoid taxes, not legitimate tax breaks that give Grandpa a couple of hundred extra bucks a year. 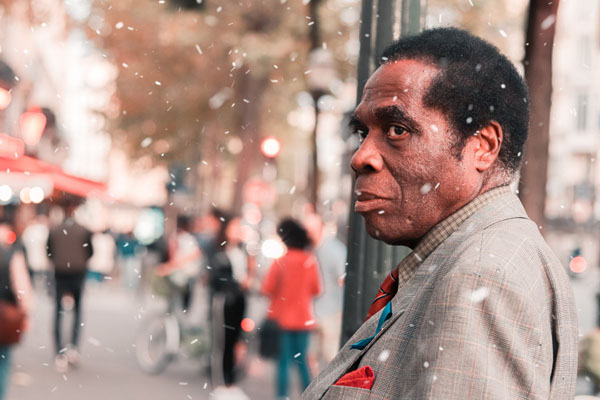 Grandpa might be delighted to get some extra cash in his bank account every year due to a tax break. Photo credit: Rosivan Morais/Pexels.

Breaks for small business
The Conservatives are vowing to reverse the liberal taxation of small business that angered so many family businesses. This would benefit a broad swath of enterprises, including farmers and represent another difference in the tax platform of the two parties.

However, none of the tax tinkering offered by the Conservatives or Liberals, or the other parties for that matter, represent bold policy.

A bold policy from the right would be tax simplification and possibly even proposing a flat tax, where all income above the basic personal exemption has the same percentage rate. Such policy trims all tax credits and loopholes … sorry Grandpa, but the age credit would have to go.

A bold policy from the left would be a tax on wealth as proposed by Democratic presidential candidates Elizabeth Warren and Bernie Sanders in the United States. An absolute wealth tax applied to the sales of homes would be a tough pill for many taxpayers to swallow.

Job numbers
What might provoke more dramatic economic and tax policy? With the drumbeats of a world recession growing, Canada’s September employment numbers, due in the first week of October, could be transformational.

Economists never place much stock in month-to-month variations of employment numbers, but Statistics Canada will publish these data two weeks before the election. This will be “hot” data.

The Liberals will spin any increase in employment as proof positive of their economic stewardship and stand pat with their economic and tax policy, while the Conservatives will seize on any decrease as evidence of Liberal mishandling of the economy.

If the employment numbers deviate much from the recent trend, we may still see bold tax policy emerge as one or both parties jockey for position in the electoral home stretch.