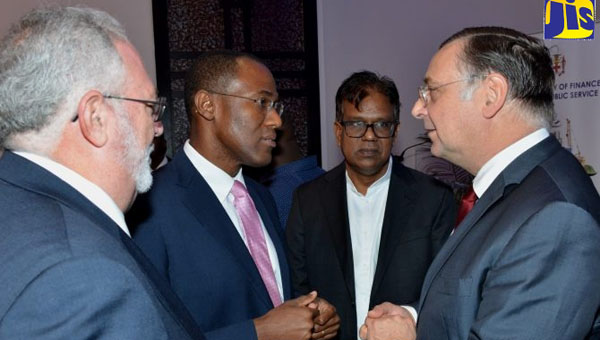 KINGSTON, Jamaica October 4, 2019 — Members of the public will soon be able to purchase shares in Trans-Jamaican Highway Limited (TJH), which owns and operates the country’s toll-road network.

Minister of Finance and the Public Service, Dr. Nigel Clarke, said the government, through State entity, the National Road Operating and Constructing Company (NROCC), has an agreement with TJH’s overseas-based principal parent companies, Bouyges Construction Concessions and Vinci, both headquartered in France, to acquire ownership of the firm.

He noted that due to the parent companies’ corporate objectives and policy, and “their view of [toll] concessions, going forward, the opportunity has arisen for a transition in ownership”.

He was speaking during a ceremony at The Jamaica Pegasus hotel in New Kingston, yesterday, where the announcement was made.

The Finance Minister disclosed that NCB Capital Markets Limited was selected as the IPO’s lead arranger by consultancy firm, Price Waterhouse Coopers (PwC), which is serving as NROCC’s advisor.

NCB Capital Markets Limited was one of 16 entities responding to a Request for Proposal (RFP), issued by PwC.

Dr. Clarke said the TJH IPO is likely to be the largest undertaken in Jamaica, surpassing that of Wigton Windfarm Limited, which was executed, earlier this year.

“There is no asset today that is publicly available, listed on the [Jamaica] Stock Exchange that potentially fits that portfolio… as TJH will.

“Given the likely size of the transaction, it will be necessary to have strong institutional participation, and we will ensure that the distribution is such that institutions have a good chance of success in their applications, while also ensuring that there is the broadest ownership possible, after the IPO,” he noted.

Dr. Clarke described the IPO as a “classic infrastructure investment opportunity”, and noted that “the lead arranger will, in time, be able to speak to the public, to institutions, to retail investors, about the pricing of the transaction and about what makes it attractive”.

“It’s a very exciting phase of Jamaica’s development… and we are ensuring that awareness is built, and that this IPO is one that everybody has the opportunity to participate in,” he added.

In his remarks, NCB Capital Markets Limited Chief Executive Officer (CEO), Steven Gooden, said the entity “is pleased to have been mandated lead arranger, on what will be, the country’s largest IPO, in terms of value”.

“We are not yet at the stage, where we can make public the specifics of the IPO. However, as the arranger for this transaction, we will be taking a very inclusive approach. At the appropriate time, we will engage our brokers to be selling agents for the offer. We commend all the stakeholders, involved in getting us to where we are today, with this transaction,” he said.

PwC Partner and deals expert, Wilfred Baghaloo, described the impending transaction as “momentous” and “significant”, because “it is the first large infrastructure project that will come into the Jamaican market”.

“We look forward to participating with NCB and NROCC in executing the transaction,” he said.

For his part, NROCC Chairman, Phillip Henriques, said the proposed IPO represents a continuation of the process of turning “dreams into reality”.

“The persons who use the toll roads, from the taxi man to the teacher, will now have opportunities to also become owners and shareholders,” he said.

NROCC entered into an agreement with TJH, which was incorporated in 2001, for the design, financing, development, operation and maintenance of Jamaica’s toll roads.

That collaboration resulted in the construction of the East-West leg of Highway 2000, between Kingston and May Pen, Clarendon; the North-South leg, from Mammee Bay, St. Ann to Caymanas, St. Catherine; and the Portmore Causeway in St. Catherine.