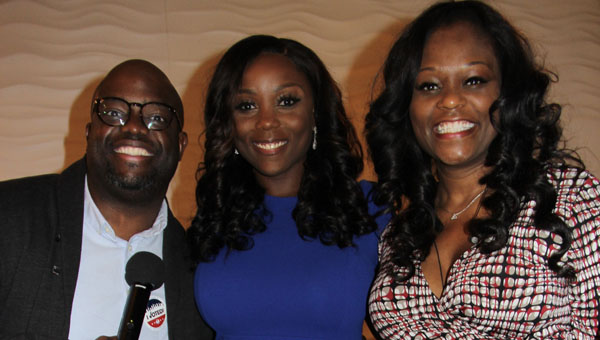 With 99 of the 121 polling precincts reporting, Louis, the daughter of Haitian immigrants, was way ahead of her nearest challenger, Anthony Beckford, who contested the elections on the Green Party line.

“I knew that there was the fire in me,” Louis told jubilant supporters, Tuesday night, at her victory party on Flatbush Avenue in Brooklyn. “God was unifying me to bring everyone together from day one.

“I was the best person for the job,” she added. “He sent people on the front line to work with me. This campaign could’ve been relatively short and sweet, but I believe this journey was long and strenuous, because I had to prove to my community, God and myself how bad I wanted this. And the efforts of my supporters, partners and allies had to dictate how hard you’ll work at it.”

Louis noted that “A Unified 45, the mantra that guided this campaign, has become reality”.

“For others, who frowned upon the vision God gave me and my peers, I believe now they understand the value of respecting an individual’s ethnicity, race, culture and religion and core values,” she said.

“God sent me a few warriors, who have been told in the past, you aren’t, you couldn’t, and shouldn’t, but they did,” Louis added.

“The best part of this story is that the warriors didn’t look like me; we didn’t come from the same places or have the same family structures,” she continued. “The common denominator was that we all had a heart to serve the community, to serve them well, and to do it together. I lean on them because they came before me, they understand.”

“This victory is ours!” Louis exclaimed. “Let’s continue to be a Unified 45.”

Those “warriors” were primarily members of the Jewish community in the Flatbush section of Brooklyn.

Some of them are legislators, who serve alongside Louis in the City Council and were on hand Tuesday night, to heap praise on her overwhelming triumph.

“Farah is a fighter,” he added. “Her career is not to stop fighting now. She’s a great person to have.”

Councilman, Chaim Deutseh, who represents the 48th Council District in Brooklyn, said “the great news is that she’s not going to run for a couple of years”.

“I’m very proud to serve with her in the City Council,” he said. “This is who we have to get the job done.”

Another Jewish City Councilman, Justin Brannan, who represents the 43rd Council District in Brooklyn, said “you can trust that Farah is going to do what’s right for this district”.

“And Farah does it like nobody else,” he said. “We’re in this together. Congratulations, Farah!”

The Rev. Al Cockburn, the Guyana-born pastor of God’s Battalion, an evangelical church in Linden Boulevard in Brooklyn, said: “We put the right person in office, and she’s doing an awesome job.”

“This is one of the toughest races that I’ve been involved in, but we prospered,” said the representative for the 42nd Assembly District in Brooklyn and the first ever Haitian American from New York City to be elected to the State Assembly.

“This is one of the most inclusive races, because it involved everyone,” added Bichotte, Louis’s close friend. “She won not one, not two, but three elections.”

“Thank you, Farah, for all the legislations,” she added. “We need someone who’s fierce, who can build bridges.”

Louis defeated Chandler-Waterman, the daughter of Barbadian and Jamaican immigrants, in that race by 10 percentage points, almost the same margin as in the Special Election for the seat on May 14.

In essentially a two-way race, Louis – the Deputy Chief of Staff for the district’s former City Council representative, Jumaane Williams, the son of Grenadian immigrants, who, in February, was elected New York City Public Advocate – received 51.69 percent of the votes cast in the Primary to Chandler-Waterman’s 41.36 percent.

In the Special Election in May, Louis had received 42 percent of the votes, in the race that involved eight candidates, most of whom were Caribbean-born or Caribbean-Americans, to Chandler-Waterman’s 30 percent.

Williams had endorsed Chandler-Waterman, his former community outreach director, in both the Special Election and the Primary.

Though their names remained on the Primary ballot, after contesting the Special Election, the other candidates, had fared poorly in the Primary Elections.