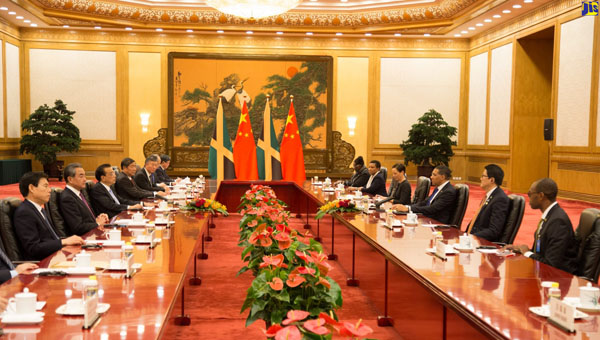 Jamaican Prime Minister, Andrew Holness (third from right), in bilateral meeting with the Premier of China, during his visit to China. Photo contributed.

KINGSTON, Jamaica, November 13, 2019 (CMC) – Prime Minister, Andrew Holness, ended his official visit to China, over the last weekend, negotiating no new loan programs with the Asian country, in keeping with its firm commitment to reduce debt rapidly, according to a government statement, issued here.

The statement revealed that Holness — who held bilateral talks with President, Xi Jingping, and addressed the opening ceremony of the China International Import Exposition — also reviewed Jamaica’s current cooperation framework with China, and explored additional areas of cooperation, agreed upon, under a new strategic framework.

It said that under the new strategic framework, the two governments have agreed to focus efforts on increasing trade, particularly to encourage more Jamaican goods and services to be exported to the Chinese market.

“Already we have seen great interest and increased demand for Jamaican Blue Mountain coffee and rums,” the statement quoted Prime Minister Holness as saying, during a wrap-up interview.

It added that on the investment side, Prime Minister Holness informed that while cooperation on infrastructure will continue, the government, “in keeping with its firm commitment to reduce debt rapidly, would not negotiate any new loan programs with our Chinese partners”.

He went on to say that infrastructure projects will therefore take the modalities of joint venture partnerships, public-private partnerships, or private sector transactions, directly between Jamaican firms and Chinese firms, as the normal course of business. Under the new cooperation framework, investments will be more strategic and focused on the development of special economic zones and logistics hubs, urban centre development, water and sewerage, agriculture, and affordable housing,” the statement noted.

The Prime Minister welcomed China’s willingness to open its markets to more goods coming from Jamaica, other than bauxite; and the interest in investing in the Jamaican economy, the statement said, noting that under the current framework of cooperation, the North South Highway construction, by China Harbour Engineering Company, was highlighted along with JISCO’s purchase of the Alpart plant and mining rights, as the two major Chinese investments in Jamaica.

“Gratitude was expressed on behalf of the people of Jamaica, for China’s assistance in agreeing to construct a new state of the art Western Children and Adolescent Hospital in St. James; constructing two infant schools, one in St. Andrew and the other in St. Thomas; and the new headquarters building for our Foreign Affairs Ministry in Downtown Kingston,” the statement added.

In the area of education, the statement said Holness announced that his government will be focusing on technology training and building out more school infrastructure, to accomplish this.

Later this month, China’s Vice Minister for Education, Weng Tiehui, will pay a working visit to Jamaica to sign a memorandum of understanding (MOU) in the field of education, and to exchange views on new strategies needed, to prepare our societies for the future of work.

The statement said that the leaders of the two countries also discussed cooperation in sport and climate change.