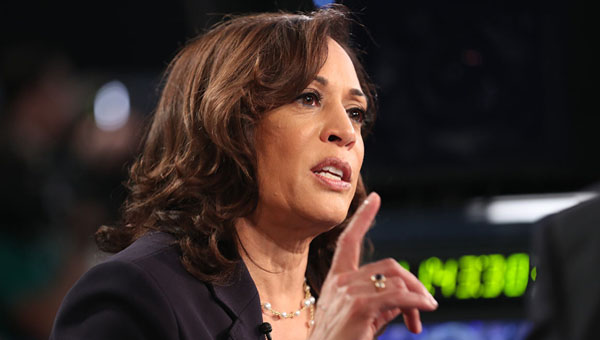 SAN FRANCISCO, California December 4, 2019 (CMC) – US Democratic Presidential candidate, Kamala Harris on Tuesday said she was terminating her bid for the Democratic Party’s nominee in next year’s US Presidential Election.

Harris, 55, the daughter of a Jamaican father and Indian mother, who represents California in the US Senate, said was suspending her campaign because of lack of funding.

She described, in a statement, her decision to quit the race as “one of the hardest decisions of my life”, adding that her campaign “simply doesn’t have the financial resources we need to continue”.

“I’m not a billionaire,” said Harris, a former attorney general of California and former San Francisco district attorney. “I can’t fund my own campaign. And, as the campaign has gone on, it’s become harder and harder to raise the money we need to compete.”

“In good faith, I can’t tell you, my supporters and volunteers, that I have a path forwar, if I don’t believe I do,” continued Harris, who was elected to the US Senate in 2016. “So, to you, my supporters, it is with deep regret — but also with deep gratitude — that I am suspending my campaign today.”

Harris’s departure from the Democratic Party’s nomination leaves 15 candidates in the race, including former US Vice President, Joe Biden, who is considered the front-runner.

In late July, Harris joined with New York Congressman, Jerrold Nadler, Chairman of the House Judiciary Committee, in introducing the Marijuana Opportunity Reinvestment and Expungement Act, considered to be one of the most comprehensive marijuana reform bills ever introduced in the US Congress.

“Times have changed; marijuana should not be a crime,” said Harris then. “We need to start regulating marijuana, and expunge marijuana convictions from the records of millions of Americans, so they can get on with their lives.“

Harris said then, that Caribbean and other immigrants will also benefit from the Marijuana Opportunity Reinvestment and Expungement Act, “as they will no longer be subject to deportation or citizenship denial, based on even a minor marijuana offense.”

In addition, she said the Act also ensures that all benefits in the law are available to juvenile offenders.

In July, Harris was among over 20 Democratic candidates competing in a crowded field in the 2020 US presidential race.

If she had secured the Democratic Party’s nomination, she would have been the first African American woman to be a major party’s nominee.

In 1972, the late Shirley Anita Chisholm, the daughter of a Barbadian mother and a Guyanese father, became the first Caribbean and African American candidate to seek nomination from a major US political party for President of the United States.