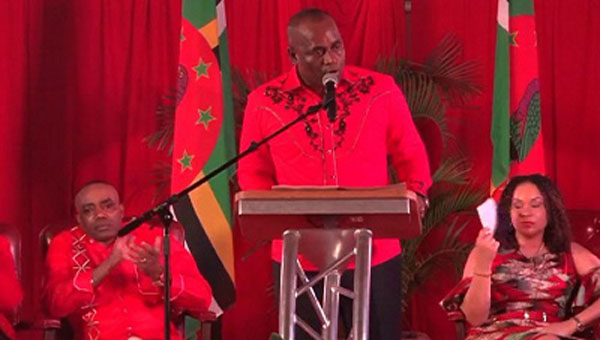 ROSEAU, Dominica, December 7, 2019 (CMC) – The ruling Dominica Labour Party (DLP) increased its majority in the 21-member House of Assembly by two seats, after it won yesterday’s general election, according to the preliminary results, released by the Electoral Commission, today.

The Commission said that the DLP, which won its fifth consecutive term in government, won 17 of the 21 seats, while the main opposition, United Workers Party (UWP), saw its seats allocation decline to four, from six, in the previous legislature.

Prime Minister, Roosevelt Skerrit, 47, who also became the first Head of government to win a fourth consecutive term in office, comfortably retained the Vielle Case seat, north of here, which he has been representing in parliament, since 2000.

Skerrit’s wife, Melissa Popone Skerrit, now joins the wives of the prime ministers of Antigua and Barbuda and Jamaica, who have all successfully contested general elections, for the first time.

She won the Roseau Central seat, securing 1,056 votes, as against 866 for the UWP’s Glenroy Cuffy.

The UWP held on to the Roseau North constituency, where Danny Lugay held off a challenge from former UWP member, Joseph Isaac, who, following the 2014 general election, switched to the DLP.

But the party was not successful in retaining the Roseau South seat, where its former deputy leader, Joshua Francis, was trounced by newcomer, Shakira Lockhart, by 2,214 to 1,915 votes.

The UWP had contested the election, complaining for the need for electoral reform, and in his broadcast to the nation, soon after claiming victory, Prime Minister Skerrit said the issue will be among the first priorities of his new administration.

He said that it is important to move beyond the legal and other controversies that marred the general election, and begin the process of reform that satisfies the national interest.

“Having reflected on this issue, it is my intention to invite a renowned Caribbean jurist to lead a National Commission on Electoral Reform.

“The work of that Commission, added to all the previous consultancy and election reports from various international organisations, together with the decision of the Courts, will inform the shape of Dominica’s electoral reform,” Skerrit revealed.

He said public hearings will be held throughout the country, and all Dominicans will be able to appear before the Commission and give their views.

“Provisions will be made for anonymous submissions, as well as for an open discussion forum on social media sites,” he added.

Caribbean Community (CARICOM) Chairman and St. Lucia’s Prime Minister, Allen Chastanet, sent a congratulatory message to Skerrit, on the election that had been monitored by several regional and international organisations, including CARICOM, the Organisation of American States and the Commonwealth.

Chastanet described the victory as “resounding”, adding “the people of Dominica demonstrated their confidence in the policies and leadership of you and your party, by returning you, for yet another term of office”.

“The people have spoken and the results must be accepted in a manner that ensures peace and calm in the country. I look forward to working with the re-elected government of Dominica, in seeking to ensure the goal of a climate-resilient country and region is achieved, as we continue to pursue our quest for sustainable development,” the CARICOM Chair stated.