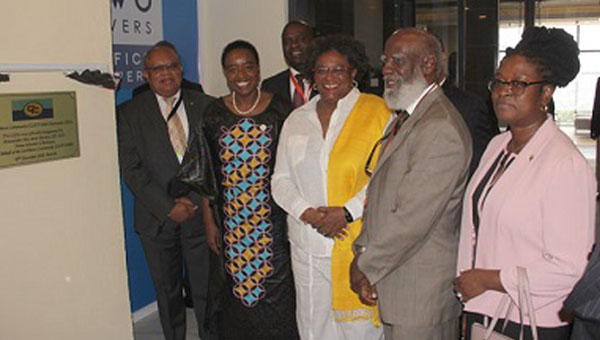 NAIROBI, Kenya December 8, 2019 (CMC) — The Caribbean Community (CARICOM) inaugurated its diplomatic office, here, yesterday, with Barbados Prime Minister, Mia Mottley, saying it could become the most important contact between the 15-member bloc and the United Nations.

“I would like to suggest, to those here, that perhaps, more than any other location — more than Geneva, more than New York — the CARICOM representation in Nairobi, is going to be the one that is going to have the greatest impact on how our nations function, how we build, how we trade, how we deal with our food security, and, above all else, how we deal with our water security, because one of the more silent consequences of this climate crisis has been on our ground water supply across the region,” Mottley said.

The United Nations Office in Nairobi is one of four major United Nations office sites, where numerous different UN agencies have a joint presence. Nairobi is the global headquarters for two UN programs — the UN Environmental Program and the UN Human Settlements Program.

Mottley said CARICOM needs technical support, as well as the amplification of the financial development resources, noting the Warsaw Development Mechanism for Loss and Damage as a consequence of climate change.

The Mechanism, created in 2013, acknowledges that “loss and damage, associated with the adverse effects of climate change, includes, and in some cases involves, more than that which can be reduced by adaptation”.

Mottley, however, said that the Mmechanism was “never given life or flesh, and, therefore, these are some of the real issues that we, in the Caribbean Community, have come to Nairobi to work and fight for, on behalf of our people”.

She argued that for CARICOM, “this is not just an optional battle, this is the battle for our very survival as a region”, noting the historic nature of the opening of the diplomatic office, here. 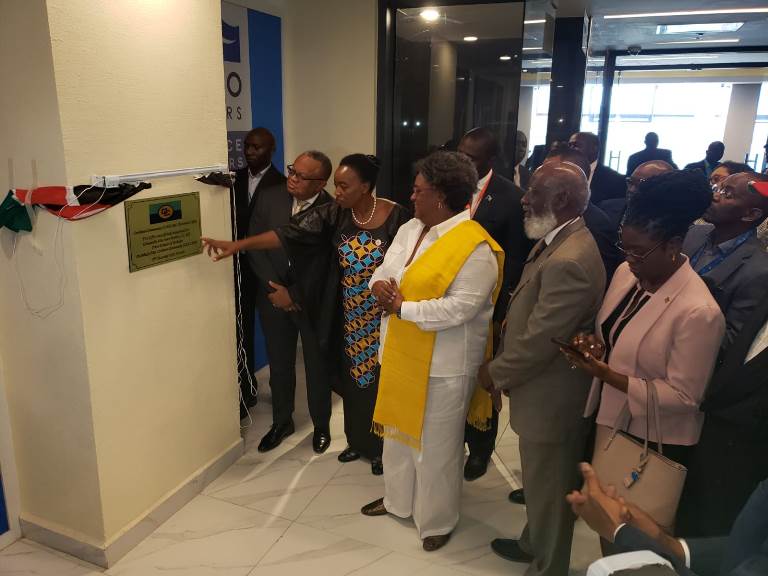 Barbados Prime Minister, Mia Amor Mottley (fourth from left), unveiled a plaque at the ultra-modern business complex in Nairobi, Kenya, which will be the home of a joint diplomatic mission. Photo credit: Barbados PMO.

She said the event “carries with it, a level of emotion that those, who have gone before and who gave of their time, their blood, their energy to be able to have the fraternal embrace for a common fight for the betterment of the lives of our people, after decades and, in some instances, centuries of exploitation, would better appreciate the magnitude of the moment, on which we meet today”.

Mottley said that the Caribbean and Africa have been separated, not simply by the Atlantic Ocean, but also by “centuries of division and exploitation”.

Mottley said that CARICOM was adamant that it would not allow the separation, between the region and Africa, to continue any further.

“But we believe that it is incumbent on our generation, to move to the next level, and that we have no one else to blame but ourselves, if we do not remove the separation that was foisted upon us for centuries,” the Prime Minister opined.

Mottley said it is against that background that she was happy to welcome Kenya’s President, Uhuru Kenyatta, to Barbados in August, and to agree, along with Secretary-General of CARICOM, Irwin LaRocque, and Chair of CARICOM, St. Lucia’s Prime Minister, Allen Chastanet, that establishing the diplomatic office “was a historic necessity”.

The Barbadian prime minister said that the inauguration of the diplomatic office was but one of the many steps, in the next few months, “that will communicate to our people, as well as those who are watching from outside, that this is not a fly-by-night relationship…

“This is one that is going to be anchored, deeply, and is intended to unleash the people-to-people communication and cooperation, and the trade and investment opportunities, such that our nations can prosper, relying on each other and not simply relying on those from the North  Atlantic regions of the world.”

Mottley said she will, in January, take up office as Chair of CARICOM and that she intends to work with the Kenyan government to make real, the first CARICOM-African summit that will help “to chart the destiny of our two regions, in a way that is in our own deliberate interest and not that of any others”.

Mottley said that against that background, CARICOM hopes that in June, on the way to the Commonwealth Heads of Government Meeting in Rwanda, to put in place, firm arrangements for the inaugural summit.

The Barbados prime minister also mentioned that CARICOM and Kenya have seen opportunities for investments.

“We, therefore, believe that within CARICOM there is that capacity to be able to see how best, not just from Havana, where your ambassador is based, but also in the context of our presence here now in Nairobi, which for us is even more special, because of the extent to which we can access the United Nations offices that are of perhaps greatest relevance to the maturity of our Caribbean people, at this point in time, in a climate crisis.”

She said that for CARICOM, the message has been consistent: “We are on the frontline of this climate crisis, but it is war that we did not cause, but it is one for which we are the first victims,” and that CARICOM, therefore, believes that the ability to have a presence there as a bloc, and hopefully, individual counties more and more.

Mottley gave Bridgetown’s commitment that early next year, it will be in a position to “shape and influence the policy framework that is going to be foisted upon most of our countries, with respect to how we live, how we trade, and how we manage our environment in this very difficult time”.

The prime minister said she was very conscious that, even as she speaks and refers to the Caribbean being on the frontline, Kenya has been experiencing unusual rains and floods that have cause tremendous dislocation and loss of life.

She said that for CARICOM and Kenya, the notion of climate refugees is a real thing.

“It is not speculative and, therefore, this office will portent far more than initially meets the eye,” Mottley said.

Speaking at yesterday’s event, Juma commended CARICOM “for bending the arc of history” and congratulated the bloc for taking the decisive move to embrace Kenya, Africa and the United Nations fraternity in Nairobi.

“You have a strong advocate in President Uhuru Kenyatta, and you can be assured of Kenya’s solidarity,” the Kenyan official said, noting that Nairobi’s Afrocentric foreign policy orientation is unambiguous in its focus to strengthen relations within the continent, and to reach out to the sixth region of Africa – the African Diaspora.

“Under the stewardship of President Kenyatta, we will continue to forge stronger ties with people of African origin, both at bilateral level, we want to engage individual countries, but also within the African Union as well as the multilateral framework.”

She said she was honoured that the decision had come at the time of the celebration of the International Decade of People of African Descent, which runs from 2015 to 2024.

“We welcome our brothers and sisters to their home away from home…” Juma said.

The CARICOM diplomatic office was inaugurated at a time when the Africa, Caribbean and Pacific Group of States (ACP) is holding its summit of Heads of State and Government, from December 9 to 10, under the theme “A Transformed ACP: Committed to Multilateralism”.