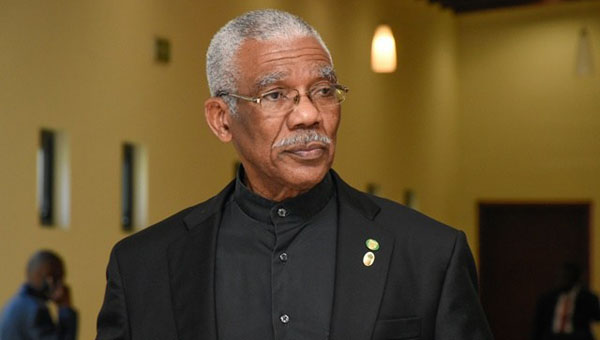 GEORGETOWN, Guyana, December 8, 2019 (CMC) – President David Granger says he remains optimistic that the International Court of Justice will rule in Guyana’s favour, in its ongoing border dispute with Venezuela.

“We hope that we will get a judgement and we are confident that we will be getting a very favourable judgement, in a very short time,” Granger told a radio program here.

He said that the issue had been a “monkey on our backs for the last half-century”.

“The territorial question has a lot to do with our petroleum exploration, the lineation of our maritime frontiers and seeking the court’s reassertion of the agreement of 1899, which clearly demarcated our borders,” Granger added.

The century-long border dispute escalated in May 2015, when oil was found in disputed waters, off the coast of Venezuela.

In April this year, Guyana announced that it had asked the ICJ to proceed, at the earliest possible date, with a hearing to determine, whether or not, it has the jurisdiction to hear the border dispute involving Venezuela.

Caracas has long stated that the Hague-based court, which is the principal judicial organ of the United Nations (UN) and established in June 1945, does not have jurisdiction to hear the border case, filed by Guyana.

The two countries were asked to submit written submissions about whether the Court had jurisdiction over the matter, and a Ministry of Foreign Affairs statement said then, that Guyana had submitted its written Memorial on Jurisdiction – demonstrating that the Court has jurisdiction to decide on the validity of the Arbitral Award and the resulting boundary – on November 19, last year.

Guyana submitted the case to the Court after the UN Secretary General, António Guterres, determined that the dispute over the validity of the Arbitral Award, and the resulting boundary, must be decided by the Court. That constitutes a sufficient jurisdictional basis for the Court to proceed.

The Guyana government said that it regrets that Venezuela, notwithstanding its obligations under the Geneva Agreement and the Secretary General’s decision to refer the matter to the Court, has chosen not to participate in the case.

Granger told radio listeners that despite Caracas’s stance, Guyana has been fulfilling its humanitarian mandate by facilitating Venezuelan migrants crossing the border to escape the socio-economic turmoil in their homeland.

Granger said he does not view the migrant situation as a threat to Guyana’s territorial integrity.

“Should there be a military threat, I am very confident that the defence forces will be capable of deterring aggression,” he added.

The ICJ will begin hearing arguments in March 2020, on whether it has jurisdiction over the case, filed by Guyana, as it relates to the Arbitral Award of 1899, Guyana vs Venezuela.