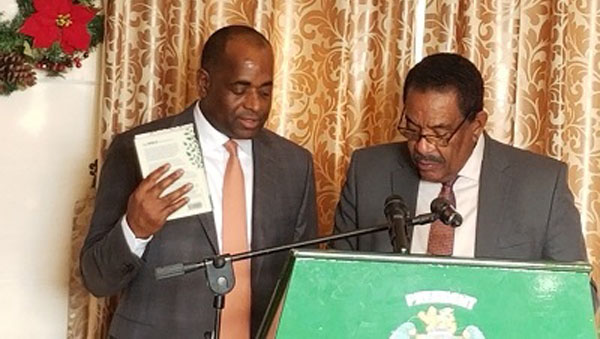 But even as he was being sworn in, the leader of the main opposition United Workers Party (UWP), Lennox Linton, was hinting at “irregularities” in the polls, that saw his party’s seat count in the 21-member Parliament reduced from six to four, according to the preliminary results.

“We should never elevate skulduggery to a virtue by congratulating those who succeed by dishonest ways. The 2019 general election in Dominica was not free, it was not fair, it was rigged, it was stolen, plain and simple,” Linton said in a Facebook page post, urging followers and supporters to join him, later on Saturday night, when he addresses them .

But in a speech after he was sworn into office, Prime Minister Skerrit extended a hand to Linton, urging him to get together for the benefit of the country, even while saying that he believes the “external forces” that sought to derail Friday’s general election did not treat Linton right.

“I have never seen so much external interest in our campaign,” Skerrit said, saying that he is hoping that now that the electorate had spoken, quite forcefully, that they would now channel their interest into rebuilding Dominica.

He reminded Linton that the DLP, which, according to the preliminary figures, had won 17 of the 21 seats,  had secured both the seats and the popular votes.

“I think the external people did not deal Mr. Linton right, they used him,” Skerrit said, noting that Linton, instead of focusing on his campaign, was being used “to carry out their plans”.

Skerrit, who led the DLP into a fifth consecutive term, said that he had sympathy for Linton, because as a legislator, he has never had to sit in Opposition.

“I do not envy him. I never had the opportunity of being in opposition, people have told me it is not nice,” Skerrit said.

He had earlier thanked the voters in the northern village of Vielle Case, whom he has been representing since 2000, adding that the Dominica Constitution makes it quite clear that you could only become Prime Minister by being an elected member of Parliament.

He said the election showed that Dominica had become a “more mature nation, mature people” given that the “world was watching us, and I think we have confounded many who thought our political system would have descended into chaos”.

He insisted that “no one can contest” the validity of the elections, and that, within the first 100 days of his new administration, the issue of electoral reform would be a priority.

But Skerrit maintained that Dominica has always had “free and fair elections”, and that Dominicans, both here and abroad, would soon have an opportunity to engage themselves in the electoral reform process.

He said also that the government would consider establishing a think-tank of people, both here and in the Diaspora, that provide guidance on socio-economic plans  and examine policies “more objectively”.

Skerrit said that his new Cabinet would be sworn in on December 17.