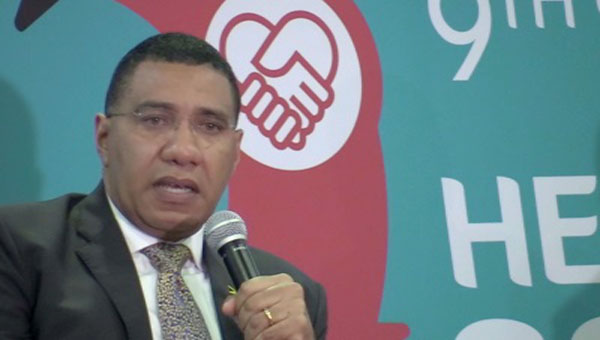 NAIROBI, Kenya, December 9, 2019 (CMC) — Jamaica’s Prime Minister, Andrew Holness, has reached out to African investors, telling them that size should not be an impediment to business — and that profit is not a bad word.

“Never let size be an obstacle for business. Jamaica is a small country, 2. 7 million people, but you would never know. The point is that on the world stage, we have an amplified voice and we speak, loudly, but we are also agile in business,” he said.

Holness was a panellist at the African, Caribbean and Pacific Group of States’ (ACP) inaugural business summit with the private sector, yesterday, held under the theme, “Economic Transformation of ACP States through Industrialisation and Private Sector Engagement”.

The business summit came ahead of the two-day ACP’s 9th Summit of Heads of State and Government, which opened, here, today, under the theme “A Transformed ACP: Committed to Multilateralism”.

Holness noted that since coming to office, in 2016, he made it a point of duty to engage Africa, and has since visited Namibia, South Africa, Morocco, and now Kenya.

He suggested that the important thing in developing a Caribbean-Africa business relationship is also to have a people-to-people understanding.

“And for far too long, we have spoken in glowing terms about relationship, but we haven’t really utilised the value of that relationship to layer on top of the business opportunities,” Holness told the business summit.

He opined that utilising the people-to-people relationship is a practical way of creating business, adding that for the Caribbean, and Jamaican, in particular, there are already strong fraternal ties with Africa, expressed in music, culture, and sports.

He congratulated Kenya — whose President, Uhuru Kenyatta, spoke at the opening and was an audience member at the summit — on its performance on the efficiency and competiveness index.

“You are now at 50 and we are 71, but don’t worry, we are going to pass you,” Holness said, laughing, before adding, to applause, “by the way, we are number six in the world in terms of starting a new business”.

The prime minister said Jamaica has had, for the last three years, the number one stock market in the world.

“It’s a small stock market — you may miss it if you are searching for the international markets — but it shows you the level, speed and intensity of business in Jamaica,” Holness said, adding there is a great opportunity for investors in Kenya, and the wider African continent, to invest in Jamaica.

“So this is a good environment for investors to consider to place resources but, more than that, we are now at a phase in our development, where we are emphasising infrastructure and energy, two critical planks of any country’s development,” Holness said, adding that his administration has been investing heavily in infrastructure.

The prime minister said he was using the opportunity to invite African investors to participate in the development of Jamaica.

The discussion followed a similar panel debate that included Prime Minister Mottley and the President of Seychelles, Danny Faure.

The audience included ACP Secretary-General, Patrick Gomes, and Tony Elumelu, a Nigerian economist, entrepreneur, and philanthropist, who has a program aimed at empowering 10,000 young African entrepreneurs.

Holness said it had been said, one way or the other, in the forum, that government should get out of the way, and that regulators should say what they want and then step aside.

The Jamaican leader said that like Africa, the Caribbean has gone through phases, and its current phase is trying to determine what is the right role for government.

“Because lurking in the background of this newly-discovered spirit of enthusiasm about industry and commerce and growth, is still a large percentage of our population lives in absolute poverty,” Holness said.

“So in the conversation about the economy and the incorporation and the new partnership with the private sector, must be, within that partnership, an understanding that we have to do more in dealing with poverty in our countries.”

He said Elumelu’s efforts is a perfect example of how business, with good corporate responsibility, supported by governments, can have efficient private sector, efficient businesses making profit, but at the same time, address the issues of equity and inequality that has traditionally plagued Africa, Caribbean and Pacific countries.

Holness said he believes that ACP countries are at a juncture in their development, “where, if played correctly; if governments understand their role in facilitating businesses; if governments understand their role of curbing corruption, and increasing their legitimacy with their population; and private sector people understand that profit is not just for them, profit is for mankind; then we, as African people, as Caribbean people, as people from the Pacific, can lead in this fourth industrial revolution — and truly achieve property for our people”.