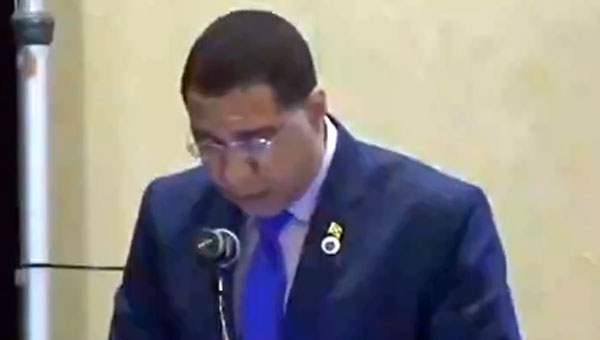 Jamaica Prime Minister, Andrew Holness, who is on a working visit to Japan, acknowledged, in a statement, that there are challenges in the fight against crime. Photo credit: CMC.

KINGSTON, Jamaica, December 13, 2019 (CMC) – The Jamaica government says it remains committed to fighting the crime situation in the country, as private sector groups called on it, as well as the opposition People’s National Party (PNP), to end their combative utterances on crime and channel their efforts towards expediting the national consensus on crime.

The call followed Tuesday’s fatal shootings, in Dover near Kitson Town, St. Catherine, a parish in the south east of the island, when gunmen shot nine people, fatally wounding four of them.

A statement, released from the Office of the Prime Minister, said, while the government has increased resources to law enforcement, there is need for a partnership between Jamaicans and the State.

Prime Minister, Andrew Holness, said that this is the only way for Jamaica to see consistent reductions in crime, and that the recent convictions in the courts demonstrate that there is an improvement in the work of the police.

But Holness, who is on a working visit to Japan, acknowledged that there are challenges in the fight against crime, and that better days are ahead.

Opposition Spokesman on National Security, Fitz Jackson, has said the murders in Dover have led to a serious increase in fear among Jamaicans, because the murders, from all appearances, were unprovoked, random and heartless.

Jackson has called for the police to move swiftly to pursue their investigation and ensure apprehension of the perpetrators.

Health Minister, Dr. Christopher Tufton, who is the Member of Parliament for the area, condemned the attack, describing it as “senseless” and not representative of “how we should live”.

He said his immediate concern was to bring comfort to the victims and their relatives, and to ensure that the survivors are given “the best possible medical treatment”.

Meanwhile, private sector groups – the Private Sector Organisation of Jamaica (PSOJ), Jamaica Manufacturers and Exporters Association (JMEA) and Jamaica Chamber of Commerce (JCC) – said, in a statement, that they are concerned that, despite efforts, crime remains at crisis levels.

They said that in late October, they joined the two political parties and many other civic groups, in committing to attaining a National Consensus on Crime.

But in recent times, the discourse has moved away from being collaborative, and there is a heightened level of political rhetoric building, about the state of crime in the country.

The private sector groups are urging the political leaders to keep their teams focused on taking a joint position, and expediting efforts to identify the steps needed to reduce violence and crime.

Earlier this month, Justice Minister, Delroy Chuck, urged Jamaicans to end the culture of not reporting criminal activities to law enforcement authorities for fear of being murdered, saying persons must muster the courage to speak out and expose criminals and wrongdoers.

Last year, 1287 people were murdered and, so far this year, more than 1,060 people have been killed, island-wide.