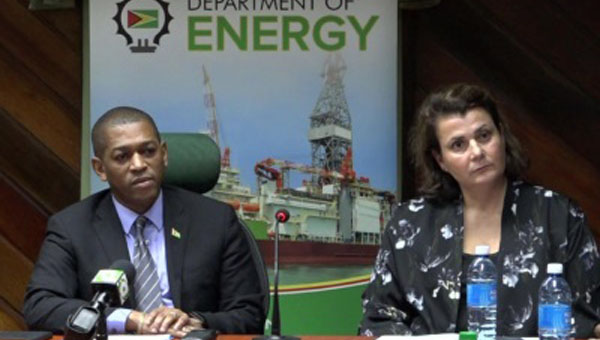 Guyana Government Seeking To Correct “Misinformation” Regarding Sale Of Oil

GEORGETOWN, Guyana, December 16, 2019 (CMC) – The Director of Energy, Dr. Mark Bynoe, today, maintained that the government did not breach any procurement rule, after it announced, last week, that it had invited refiners, from around the world, to bid for three million barrels of Liza-blend crude that goes on the market, next year.

“It is a sale and it doesn’t require going through a procurement process, whether you are selling sugar on the open market or some such,” Bynoe told a news conference, as he insisted that there has been no procurement breach, and that the Department of Energy (DoE) had no intention of keeping the matter a secret.

“When we go to an RFP (request-for-proposal) then that will have to go through the full procurement process. That’s where we are saying, we launch a request for proposal, it will go through the National Tender & Procurement Administration (NPTA),” Bynoe said, adding that the DoE was awaiting the finalization of the bidding, before informing the country.

“Guyana is operating within a system, whereby it is dealing with international, commercial transactions as well. What we are aiming to do, is come to you when the matter was concluded, and not during, because what it can do is weaken the government’s negotiation position,” he told reporters.

Earlier, the government dismissed what it said was “misinformation”, regarding the upcoming short-term arrangements for the direct sale of the first three lifts of the country’s portion of first oil from the Liza 1 program.

In a statement, the DoE said that two stages of the process are envisaged, with the short-term first phase set to commence this week, with a focus on setting “national benchmarks” for selling the country’s share of its crude in the future.

It said “selected companies are invited to bid to buy Guyana’s product in the very short term”.

“These companies are required to make offers, from which Guyana’s team will choose the most acceptable proposals,” the statement said, noting that the process is a direct sale and not the procurement of any marketing services.

The DoE said the second phase involves the RFP, and that “this is for marketing services for Guyana’s crude and is currently in the final stages of preparation”.

“This strategy was employed, upon serious consideration of advice, given by an international team, external to the DoE,” the statement, said, adding that the team consisted of a crude marketing specialist, a commercial specialist and an external legal adviser, among others.

Byone told reporters, today, that even before taking the bidding route, the Department consulted with the Public Procurement Commission (PPC), to ensure that they were not contravening any of the laws of Guyana.

“It doesn’t help for us to be truncating commercial business through the media. So it was never the intent for Guyana to be shielding what is happening here. I was hoping that we can have a wrap up here, where we can say to you, this is what was done. It is the government’s intent to keep things under wrap.”

He revealed that the companies that were selected include ExxonMobil, Hess, China National Oil Company, Shell, Chevron and British Petroleum, adding “it’s important for us and the operators, because of introducing to the open market. Making Liza crude a benchmark”.

Guyana is expected to begin the commercial exploration of its oil sector in 2020. But it is scheduled to start production, this month, with the Liza field expected to produce an estimated 120,000 barrels a day, by next year. By 2025, it’s expected to ramp up to 750,000 barrels daily.

“They are companies with very vast experience, well-known to the market. We reached out to a wide range of companies. Not only do they have vast experience in crude oil, but they have experience, they have a global refining footprint. They are very much aware of the intricacies of introducing a new grade,” she related.

She said that the request for proposal would be issued for one-year, marketing contracts for the sale of Guyana’s entitlement of oil.

“It will be a marketing-contract term for Guyana barrels. It’s going to be at least one year, depending on the marketer. It is going to be based on a marketing fee,” she said, noting that the DoE is currently in talks about an introduction phase.

“The international market traders and international oil companies are all looking at us, to see how we perform in just the first few months and how the grade is going to perform its incubation or initialization into the market.

“The request for proposal would not have served us, because the RFP would have been at a point, if we were doing it now, where we don’t know the real market value of our crude. What we are trying to do is try to test, through a refining system, and take back from the refiners, but also marketing channels.

“We want to run it through systems that will give us feedback on the fair market value for this grade. So the RFP would have been too premature and would not have allowed the introduction of the grade…Guyana would not be charged for transporting the fuel from Guyana to the refinery,” Markouizue told reporters.