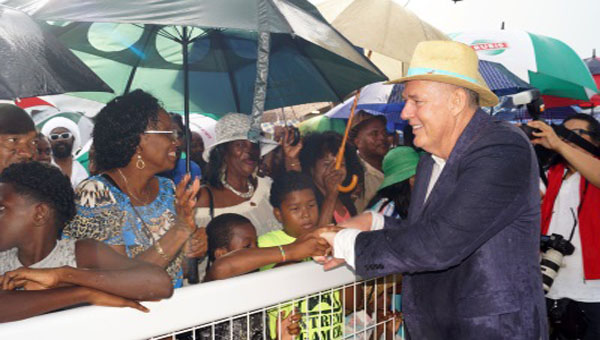 CASTRIES, St. Lucia, December 16, 2019 (CMC) – Prime Minister, Allen Chastanet, says the multi-billion-dollar Pearl of the Caribbean project has always been about transforming the south of the island, as St. Lucia staged “The Richest Race in the Caribbean”, the first-ever international horse race, here, over last weekend.

Chastanet, writing on his Facebook page, said that the project will “provide greater economic, social and leisure opportunities for St. Lucians, especially those living in the south”.

He explained that the horse race competition “signals the official beginning of a wave of positive development in Vieux Fort and surrounding communities”.

“As I have repeated, the horse racing track has not been financed by CIP Funds (Citizenship by Investment), however, as the DSH Group enters into the second phase of development, which includes hotels, villas and other types of real estate development, the new phase will have CIP components,” he said.

Under the Caribbean Investment Program, St. Lucia provides citizenship to foreign investors, who make a substantial investment in the socio-economic development of the island. St. Lucia is among several Caribbean countries with similar investment initiatives.

The government has, in the past, defended the US$2.6-billion “Pearl of the Caribbean” project as “one of the most adventurous and ambitious projects in the Caribbean”.

The project, which entails a horse racing track, high-end hotel and residences, a casino, free trade zone, an equine diseases-free zone, and a marina, is being undertaken by the Hong Kong-based Desert Star Holdings (DSH), and the government has said it is poised to make St. Lucia “an even more unique destination, and create economic activity, as never before seen, in the south of the island”.

In his Facebook post, Chastanet said that “over the next few days, I will be sharing more details on several aspects of this new and exciting project”, and urged St. Lucians to share the “vision for the Pearl of the Caribbean, a major component of building a new and progressive St. Lucia, for the benefit of all”.