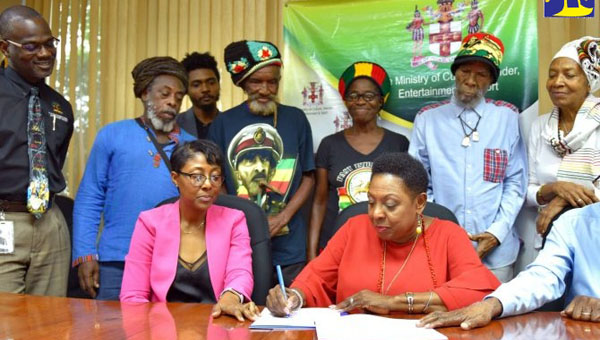 KINGSTON, Jamaica, December 20, 2019 (CMC) – The Jamaica government has signed a Deed, establishing a trust fund, 56 years after the Coral Gardens incident in St. James, where the police and soldiers detained Rastafarians.

Following a violent altercation at a gas station in Montego Bay, Jamaican police and military forces detained Rastafarians, throughout Jamaica, killing and torturing many. Exact numbers are not available, but estimates place the number of detained individuals “as high as 150”.

Culture, Gender, Entertainment and Sport Minister, Olivia Grange, said the document establishes the trust fund that will benefit all the victims.

“We acknowledge that for 56 years, you, our Rastafarian brothers and sisters, have lived with the physical, psychological and emotional scars of that incident at Coral Gardens and the atrocities that you experienced over the years, so we are taking steps to change that,” Grange said.

“In April 2018, in keeping with the commitment, given by Prime Minister (Andrew) Holness and in keeping with the recommendation of the Public Defender, the Ministry of Culture, Gender, Entertainment and Sport, transferred cumulatively, a sum of J$12.7 million to the Administrator General for the purpose of setting up the Trust Fund.

“So…we formalise the process in the presence of our Rastafari brethren and sisters, as part of our program of reconciliation,” she told the signing ceremony, yesterday.

In April 2017, Prime Minister Holness, apologised for what took place, on behalf of the government.

Included in the Prime Minister’s apology was the commitment to establish the trust fund, of no less than J$10 million, for victims of the Coral Gardens incident. The amount was recommended by the Office of the Public Defender, which started an investigation into the incident in May 2011. 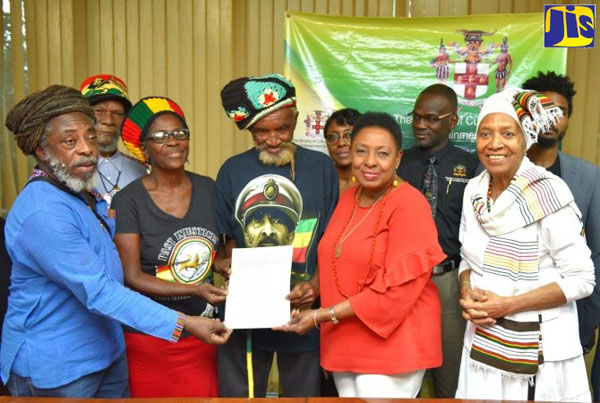 Minister of Culture, Gender, Entertainment and Sport, Olivia Grange (second right), hands over a copy of the Deed for the Coral Gardens Trust Fund to members of the Rastafarian Coral Gardens Benevolent Society and victims of the Coral Gardens incident, on Thursday (December 19) at her Ministry’s offices, on Trafalgar Road, in Kingston. Sharing the moment are Permanent Secretary in the Ministry, Denzil Thorpe (back row, second right), and Cultural Liaison in the Ministry, Barbara Blake Hannah (right). Photo credit: Yhomo Hutchinson/JIS.

Executive Director of Jamaicans for Justice, Rodje Malcolm, said establishment of the fund is “bittersweet”, given that 10 survivors from the Coral Gardens incident died, within the last two years.

“This is a historic moment of acceptance on the part of the State, by the present government, that what happened in 1963 and afterwards, was a gross violation of human rights that should have never occurred,” Malcolm said.

Treasurer of the Rastafarian Coral Gardens Benevolent Society, Lewis Brown, said the group is happy with the decision of the government for its members to benefit.

“I really appreciate what the Ministry has done for the Rastafarian Coral Gardens Benevolent Society. We have been calling for this for 56 years, since the incident took place and what took place after,” Brown said.

One of the victims, Isaac Wright, said that he is elated that he lived to see the trust fund being established.

“I feel very happy and wonderful within my spirit for the government creating history for us,” Wright said, while another victim, Edward Fray, who lost his job and all his belongings during the incident, except the structure of his house, said he is happy with the establishment of the Trust Fund.

“I lost my job. I was a butcher. I had to beg and, after one year, I saved for three months and bought a mattress and started again. I suffered a lot…But now, I feel better,” he said.