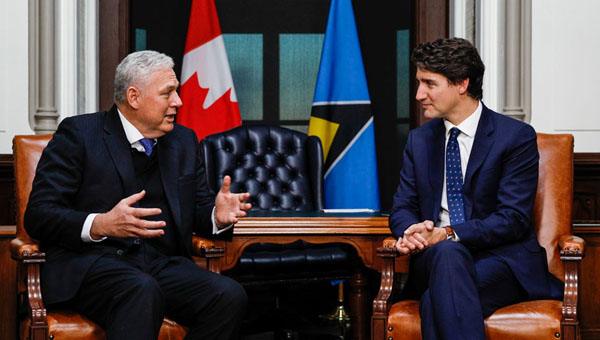 OTTAWA, Ontario December 20, 2019 — Prime Minister, Justin Trudeau, met with Allen Chastanet, the Prime Minister of St. Lucia and current Chair of the Caribbean Community (CARICOM), on Wednesday, to discuss the longstanding partnership between Canada and St. Lucia, and Canada’s engagement with the wider Caribbean community.

The Prime Minister commended Prime Minister Chastanet for his regional leadership and his work as Chair of CARICOM, including ensuring that the specific challenges, faced by Caribbean countries and other Small Island Developing States, inform global action on climate change.

Trudeau was pleased to confirm Canada’s interest in the development of innovative financing mechanisms that would address issues, faced by many countries in the region, and looks forward to future engagement with CARICOM leaders.

The Prime Ministers also discussed opportunities to increase trade and investment, between Canada and the Caribbean, including energy, infrastructure, and tourism.

“I thank …Prime Minister Justin Trudeau of Canada for always being a friend to St. Lucia. It was indeed a pleasure meeting with you and discussing matters important to my country and the rest of the region and world,” Chastanet posted on his FaceBook page.

“St. Lucia remains a friend of Canada and looks forward to continuing these strong ties that bind us into the new year and beyond,” he wrote.

“This trip also allowed me to meet with Sunwing Vacations in Toronto,” Chastanet added, noting that prior to his “Canadian working trip, I was in Washington DC, where earlier in the week, I met with the World Bank and executives of companies interested in investing in St. Lucia”.