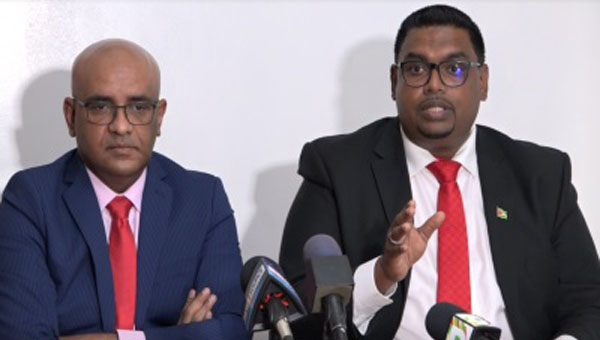 Peoples' Progressive Party/Civic (PPP/C) presidential candidate, Irfaan Ali (right), who is expected to be sworn in as Guyana's next President, seen with PPP/C General-Secretary, Bharrat Jagdeo, and at a recent news conference. Photo credit: CMC.

Both Ali and the Party’s General Secretary, Bharrat Jagdeo, told a news conference that there would be no negative campaigning, ahead of the election.

Full-page newspaper advertisements have surfaced in the local media in recent days, by a group, calling itself Committee to Save the PPP, that has been promoting a call for former attorney general, Anil Nandlall, and Dr. Frank Anthony to replace Ali, a former housing minister.

But Ali has sought to dismiss the questions regarding his suitability for the top political position in Guyana, telling reporters that “the leadership of this party has placed responsibility in me. They have placed confidence in me, and I have a duty, to every single Guyanese, to ensure that I do my best in their interest and in the interest of this country, in bringing our people together, in bringing development, in bringing growth and creating a better life for every single Guyanese, and that is the only thing I am interested in and pursuing”.

Jagdeo said the advertisement questioning Ali’s suitability is nothing but “fake news”, as Ali maintained that the matter was now a closed chapter.

Ali was critical of the coalition government’s handling of the agricultural sector, telling reporters that when the various sugar estates were closed by the David Granger administration, it was followed by increased taxes and fees.

“We saw increases in drainage fees, we saw increases in land taxes (and) all of this is that the input costs and the cost of production in the agricultural sector is just too high, it is not sustainable and it is not profitable for our farmers,” Ali said.

He said the poultry sector was also severely affected by the government’s policies, with as many as 6,000 people unable to maintain a living from the industry.

“Not only are we talking about the reversal of the investments in the infrastructure that will help forestry operators and miners and the international community to have reduced cost of living and reduce cost of operation …but we have to give the incentives that we outlined in the manifesto that would stimulate the growth and the expansion of the sector so, once again, the sector can create the jobs, create wealth and contribute positively to our economic prospect,” he said, adding that the same could be said for bauxite and mining.

“These two sectors have also declined tremendously; we have 60 percent of the dredges that were operating in 2014 no longer operating, thousands of jobs have been lost, thousands of families have been affected,” he added.

During the news conference, Jagdeo told reporters that the PPP/C would be asking the Guyana Elections Commission (GECOM) to conduct another round of house-to-house verification, in a last-ditch effort to find more than 6,000 persons, before the final voters’ list is prepared.

“There could be a process of revisiting them before the OLE (Original List of Electors) comes out, so they would be on the Revised Voters’ List, but once the re-verification takes place…and then have those either removed, or if they are non-existent or remain on the revised voters list,” he said.

He said that he could not agree with the position that the names of those not found should be included in the final voters’ list, without them being verified.

“We would find it very unusual that the Chair (Claudette Singh) would vote to embark on a process for verifying the 16,000 names and then seek to include names that are unverified, because the purpose of the exercise would have been defeated. So we are awaiting official notification of this matter, because there seems to be some confusion surrounding it,” he said.