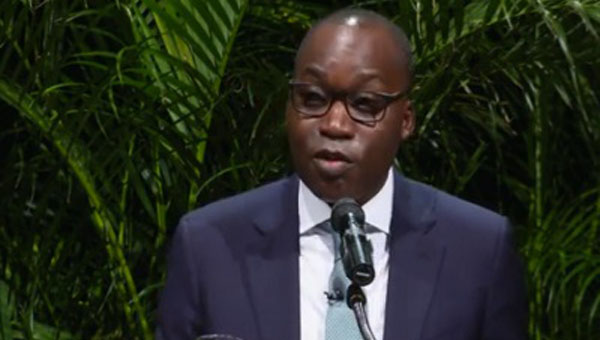 Giza Gaspar Martins, an Angolan native and former Chair of the Least Developed Countries (LDC) Group, warned, in a presentation in Barbados, last night, "as it relates to reversing the trajectory of greenhouse gasses, humanity has only a few more years before we reach a point of no return”. Photo credit: CMC.

BRIDGETOWN, Barbados, January 3, 2020 (CMC) – The former Chair of the Least Developed Countries (LDC) Group, who helped to negotiate the Paris Agreement on Climate Change, Giza Gaspar Martins, is warning the Caribbean that climate change is “real”, and that the region should not be distracted by the “occasional skeptics or the dogmatic character that manages to attract the attention of the media, or an election”.

Delivering the 44th Sir Winston Scott Memorial Lecture, sponsored by the Central Bank of Barbados (CBB), Martins said the population of the Caribbean should focus on the future and “inform your decisions, both personal and policy decision, on the best scientific advice you can get”.

Martins, an Angolan national, speaking on the topic, “Human Life is Not Negotiable: Why We Must Act Now on Climate Change”, said there was urgent need for action, noting that while small island states and low-income countries did not create the crisis, due to the impact of climate change, those countries are disproportionately affected by it.

“Climate change is indeed the greatest challenge facing humanity. Its causes are attributed to the dangerous concentration of greenhouse gases in the atmosphere, caused, in part, by human activity.

“In fact, when it comes to climate change, human activity is the destabilising factor — but not all humans. The rapid increase in the concentration of greenhouse gases in the atmosphere are traced to the industrial revolution that, I hope you agree with me in saying, it did not occur in Barbados nor in Angola,” he told the audience, last night.

Martins said, nevertheless, this concentration of greenhouse gases have been interfering with the global climate system, and that over the past decades, “our understanding and acceptance of the relationship is enabling the scientific world, that is allowing us to further understand how climate change is impacting our social and economic way of life.

“So far, we know, beyond reasonable doubt, that there is a discernible upward trend in the average temperature of the surface of the earth. This increase has unleashed a series of related phenomena and events that are profoundly affecting the way we exist and, in some cases, our very existence,” he posited.

The Angolan official said that among this phenomena is the obvious melting of the glaciers that could lead to sea level rise, adding “the projections of the impact of sea level rise, by the turn of the century, are devastating, not only to Barbados and Angola, but to all of shore communities around the world”.

He said the difference being, the capacity and ability to adapt to sea level rises.

Martins said that the increase in temperature is also catalysing ocean acidification, a phenomena, which, he said, is closely related with the amount of carbon dioxide that oceans absorb.

“The acidification of the oceans is now interfering with the prevalence of biomass in the oceans, which, in turn, impacts food security and the livelihood of coastal communities,” he said, explaining that average temperate-rise is also changing weather patterns, reducing rainfall, fueling extreme weather events  that, in turn, contribute to land degradation.

He stated it was also destroying societies and economies that sustain small island states.

“These and other, directly or indirectly-related, events are making our planet more susceptible to conflict, less safe, less stable and less habitable. The effects of climate change will continue to impact our lives in a tiered system, where one event triggers a series of others, continually multiplying and causing others that are profoundly changing our societies; (and) scientists are now warning us that as it relates to reversing the trajectory of greenhouse gasses, humanity has only a few more years before we reach a point of no return,” Martins warned.