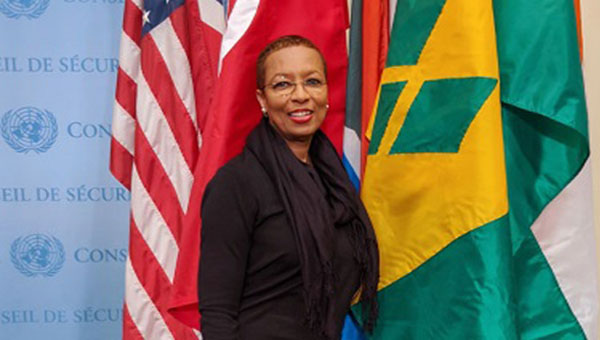 I. Rhonda King, St. Vincent and the Grenadines' Permanent Representative to the United Nations, declared that her country will discharge its duties and responsibilities with steadfast adherence to " the values and principles enshrined in the United Nations Charter". Photo credit: CMC.

UNITED NATIONS, New York January 3, 2020 (CMC) – The national flag of St. Vincent and the Grenadines has been installed at the United Nations Security Council, as the multi-island country begins its historic, two-year term as a non-permanent member.

In June 2019, St. Vincent and the Grenadines became the smallest nation ever, in terms of land mass and population, to be elected to the UN’s highest decision-making body.

Speaking at the flag installation ceremony at the UN headquarters, St. Vincent and the Grenadines Permanent Representative to the United Nations, I. Rhonda King, said “all over the world, there is a growing disquiet. People are rising up. Many, if not most, are young and they are calling on those with power to correct the current trajectory of our planet and our politics”.

She said that St. Vincent and Grenadines, a small-island, developing state, a mere 40 years after reclaiming its independence from colonial powers, was taking up its seat, for the first time, as an elected member of the Security Council.

“This day is a historic one, not only because we are the smallest nation ever to sit on the security council, but also, perhaps, because the urgency of now calls for fresh, disinterested and impartial perspectives on the seemingly intractable problems of our day,” King said, adding that St. Vincent and the Grenadines has no “geopolitical axe to grind”.

“We are just a young nation that yearns for a better world. We come to the task with a team that largely comprises young, well-educated, enthusiastic and creative thinkers,” King said, noting that apart from herself, the two deputy permanent representatives, political coordinator, and legal advisor are all females.

“Indeed, we are a team that is two-thirds female,” she said to applause, adding “that, too, is probably historic”.

The envoy, however, said that above all, “we are a Caribbean people”.

She added that, according to St. Vincent and Grenadines’ Prime Minister, Dr. Ralph Gonsalves, “we, metaphorically speaking, comprise the sounds of Caribs — our indigenous people — the rhythm of Africa, the chords of Asia, the melody of Europe and the lyrics of the Caribbean itself”.

“With this uniquely-blended psyche, we go forth with the audacity and the hope of making a small contribution toward the creation of transformative, resilient new realities,” King said, thanking the member states of the UN General Assembly for placing their trust in SVG.

“We will endeavour, every day for the next two years, to maintain that trust, by discharging our duties and responsibility with integrity, steadfast adherence to the rule of law, and the values and principles enshrined in the United Nations Charter,” the envoy said.