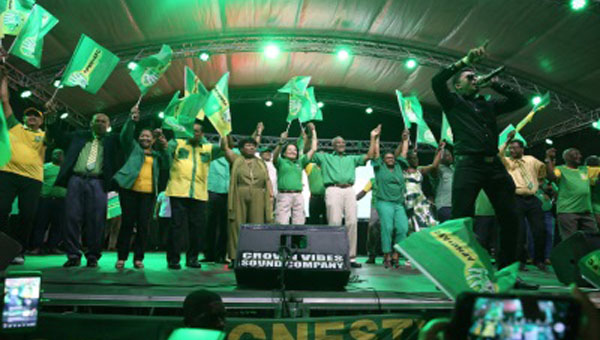 GEORGETOWN, Guyana, Saturday, January 4, 2020 (CMC) – The ruling coalition — A Partnership for National Unity (APNU) and the Alliance For Change (AFC) — government, last Friday night, launched its re-election campaign, with President, David Granger, urging supporters to ensure that his administration is returned to power, in order to “embark on a new decade of development”.

Granger’s coalition is expected to face a strong challenge from the main opposition party, the People’s Progressive Party/Civic (PPP/C), that, in December 2018, successfully tabled a motion of no-confidence against the coalition.

But as he addressed the launch of the campaign for the March 2 regional and general election, Granger said he had every confidence that the coalition, which in the 2015 poll received a slender one-seat majority in the 65-member Parliament, would be returned to office.

“I am unbothered, nothing can stop us…we are embarking on a new decade of development… we fixed things that they (PPP/C) broke up, and we need five more years to fix more,” he told cheering supporters, who gathered at Durban Park, on the outskirts of the capital, Georgetown.

“We have a plan for the next decade…five years ago, you put your faith in us, and we are asking for five more years…they (PPP/C) tried to cut us down, but they cannot stop us,” President Granger said, insisting that the coalition would be the best suited of all the parties contesting the election, to manage Guyana’s new found wealth in the oil industry.

“Guyanese will never be poor again…that wealth belongs to you, and the government will ensure you benefit… there are a lot of greedy people, don’t bother with them, we will ensure the oil wealth goes to the people, who need it the most,” he said, promising Guyanese that they will all benefit from the oil revenue, through the “decade of development”.

“We like the ordinary people and that is why we came into government to give you the benefits…we are your best guarantee to ensure you get what is yours,” Granger said, adding that Guyana is blessed, as the most beautiful and bountiful country in the Caribbean.

“And now God gives Guyana the most oil,” Granger said, telling supporters “don’t let those gifts fall into the hands of the fake and the frauds… right now you are dealing with honest people…we went through the thieving people, death squads, but never again, this country is in good hands with the coalition”.

Granger said that through the decade of development “we will get children off the streets and into schools”.

We will protect the people in the hinterland, by improving infrastructure, and we will ensure that every Guyanese has a roof over their head, as we continue to house the nation,” added Granger.

In his address, the leader of the Alliance for Change (AFC), Khemraj Ramjattan, urged supporters to “don’t stop the progress”, as he outlined the various achievements the coalition had achieved during its first term in office.

“Our record of achievement in four years has outperformed the PPP’s 23 years. We raised the minimum wage from GUY$35,000 to GUY$70,000. We raised old age pension to GUY$20,500… and offered VAT (Value Added Tax) exemption for small businesses…don’t stop the progress,” he urged supporters.

Ramjattan said, during the new term of the coalition, the government will continue to place emphasis on creating a green state, which provides a prosperous life for all Guyanese.

“We will create a green and prosperous Guyana for all,” he said, adding that a re-elected APNU+AFC government will build bridges across the Corentyne and Essequibo Rivers, even with plans in the pipeline to build a new Demerara Harbour Bridge.

“We will create a unified Guyana, where we are better connected with a bridge over the Demerara River and over the Corentyne and Essequibo,” he said, adding that the government is prepared to “turn the sod” on the bypass road, from Diamond to Ogle.

“Our vision embraces diverse faiths and groups. We want a nation, where the environment is protected for present and future generations,” Ramjattan commented, adding that while young people continue to face challenges in advancing their ideas and dreams, the coalition will implement policies to curb these challenges.

“We want to ween the next generation away from cane cutting… a place where the PPP wants to put them back. One good term deserves another. Don’t stop the progress,” the AFC leader said.

Nomination Day for the elections will be on Friday, January 10, 2020.