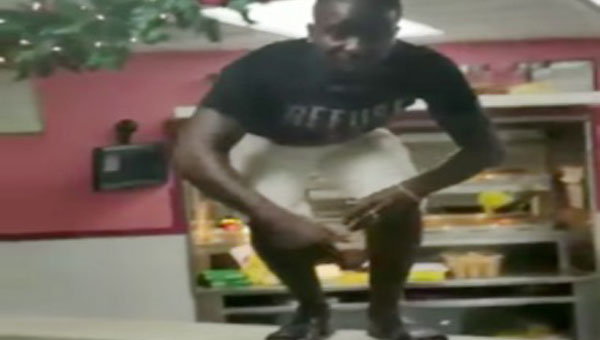 BRIDGETOWN, Barbados, Saturday, January 4, 2020 (CMC) – A 27-year-old artiste was jailed for seven days, after he pleaded guilty to making an unauthorized performance on the counter of a popular, fast food restaurant, on Old Year’s day.

Magistrate, Douglas Frederick, saying that a strong message had to be sent for such behaviour, sentenced Timothy Rugrat St Pierre to a week in prison, for his unauthorised performance at the branch of the Chefette fast food, in the capital, Bridgetown, on December 31, 2019.

St. Pierre pleaded guilty to the charge of  mis-conducting himself, by behaving in an annoying manner. The court heard that instead of placing an order when he entered the establishment, St. Pierre jumped on the counter. where customers collect their food. and began chanting, causing people to move away from the area.

He then jumped off the counter and began dancing, further shocking management and customers in the 30-second performance that was recorded by customers and posted on social media.

An apologetic St. Pierre told the court that he was a “big artiste”, whose intention was to entertain the customers. But he was chided by Magistrate Frederick, who said the accused should have known better.

“You say that you are an artiste, and if that is true, you would know that you have to seek permission to perform on someone’s property. And you should know you can’t jump on the counter, where people are getting their food.

“You have a responsibility as an artiste. I feel like sending you to prison, because the next thing, you would have other people doing this. I don’t want this to become a trend. And how are you going to repair this damage, because once something goes out on social media, it can’t be pulled back,” Magistrate Frederick said.

St. Pierre then offered an apology to the court and to the owner of Chefette, saying “I am even willing to do an apology song”.

Chefette’s security manager, Shawn Thornhill, who was also present in court, said the incident had brought shame on the popular establishment.

“The incident has damaged the reputation of the company. When the owner [of Chefette] saw the video on social media, he was very embarrassed,” Thornhill told the court.