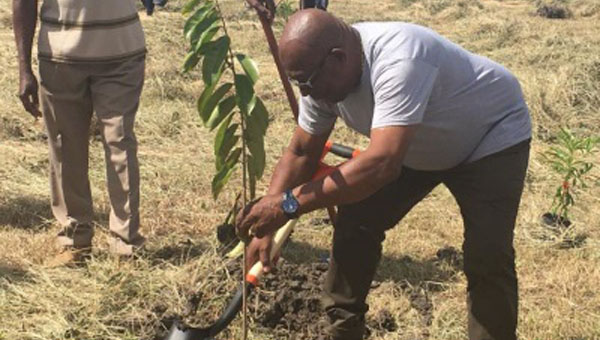 BRIDGETOWN, Barbados, Monday, January 6, 2020 (CMC) – The Barbados government is seeking to plant “more than a million” trees, as part of a national initiative to build sustainability, resilience and food security against the current, and pending, effects of climate change.

Environment and National Beautification Minister, Trevor Prescod, speaking at the launch of the ‘We Plantin’ More Than A Million National Tree Planting Project’, at St. Lucy, north of here, yesterday, said that he is “overwhelmed and full of enthusiasm”, regarding the ambitious project.

Prescod said he believes it will not only meet its target of one million trees being planted, but will “overshoot” the projected target.

He told the ceremony that the project should not be regarded as a partisan exercise, urging the country to support the national effort and join in achieving one of its plans to build sustainability, resilience and food security against the current, and pending, effects of climate change.

“While we continue to plant every day in our lives, from here on to the end of the year, apart from what is organized at the central level of the Ministry of the Environment, we’re asking individuals to plant a tree,” he said, noting that while small island developing states (SIDS) contributed the least to greenhouse gas emissions, they are the “most vulnerable” to the effects of climate change, rising sea levels and an increase in hurricanes and super storms.

He said Barbados and other Caribbean and Latin American countries were making a more positive and ambitious effort to reduce the environmental threats to their survival, and that the national tree planting project “is our collective responsibility to mankind, but moreso, to ourselves”.

“This is a matter of self-reliance, the collective consciousness of the people of Barbados in this exercise; we are saving ourselves and to ensure that we remain on the face of the earth, living on 166 square miles”.

Prescod said that the government is committed to the preservation of all life, here, on the island and future generations to come, and encouraged the public to “stay the course” and assist, however possible, in helping the project to reach its target.