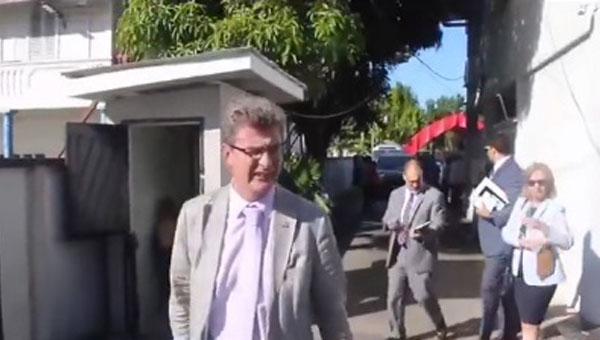 Britain’s High Commissioner to Guyana, Greg Quinn, told reporters that the meeting was in keeping with the practice the diplomats had adopted, over the last few elections in the country.

“We were just doing what we always do. Talk to all sides and get their perspective,” he said, adding that there was no particular issue that had been raised by the western diplomats.

United States Ambassador, Sarah-Ann Lynch, said Washington was looking forward to continuing helping the Guyana Elections Commission (GECOM) in its preparations for the elections, in which the fight will be between the ruling coalition — A Partnership for National Unity (APNU) and  the Alliance For Change (AFC) — and the main opposition, the People’s Progressive Party/Civic (PPP/C).

She described the discussions as being “very good”, adding “we are very much in favour of a code of conduct, and it was a pleasure to hear the priorities outlined by the opposition, as we have done so with the government.

“It is good to hear both sides,” she said, noting “we have provided a lot of assistance to GECOM and we are thrilled to have done that”.

Both the APNU/AFC and the PPP/C launched their campaigns, over the last weekend, with President David Granger urging supporters to ensure that his administration is returned to power in order to “embark on a new decade of development”.

For its part, the PPP/C, which over a year ago successfully tabled a motion of no-confidence in the government, outlined several initiatives and promised to send Granger, a retired senior army official, into permanent retirement.