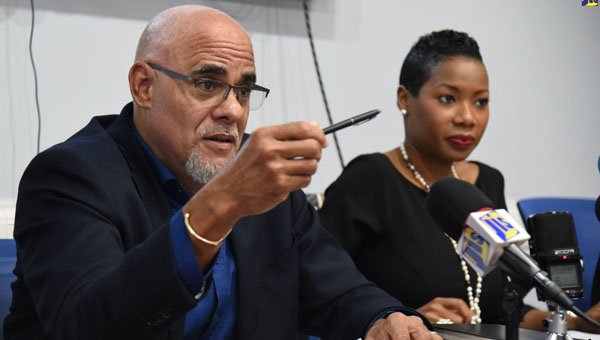 NEW KINGSTON, Jamaica Friday, January 10, 2020 — The Private Sector Organisation of Jamaica (PSOJ) is looking to forge partnerships with the government and non-governmental organisations (NGOs), to channel resources into under-served communities, as part of efforts to reduce crime.

Speaking at yesterday’s launch of the PSOJ’s 2020-2022 Strategy, at the organisation’s head office in New Kingston, President, Keith Duncan, noted that the level of crime and violence in Jamaica has, over the years, risen to “crisis proportions”.

He said crime statistics show that murder, in particular, has averaged over 1,000 each year for the last two decades, with the rate at the end of 2018/19 being approximately 47 persons for every 100,000.

This, the President pointed out, was approximately three times the Caribbean and Latin American average of 16, and six times the global average of eight.

Duncan said data indicates that there are at least 21 under-served communities contributing to over 70 percent of Jamaica’s crime statistics, and against this background, cited the need for greater PSOJ intervention, through collaborative corporate social responsibility efforts to direct much-needed resources into these areas.

These, he pointed out, include “time, cash or kind… whatever the resources that we have”.

“We really, now, have to be our brother’s keeper and really look to direct [support] into these areas,” the President emphasised.

He pointed out that these communities “have been starved of resources for many years, as Jamaica has suffered from crisis to crisis”.

“This is what we mean when we talk about inclusionary growth,” Duncan said, while emphasising that “[it is] an area that we have to address”.

Among the other areas on which the PSOJ will be placing strategic focus, over the next two years, are: human capital development, ease of doing business, increasing direct investments, corruption, and environmental sustainability.