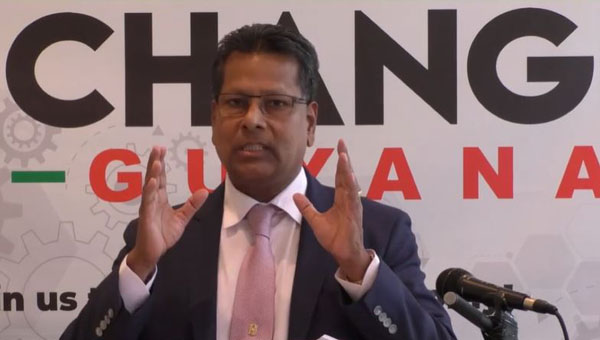 Change Guyana Presidential Candidate, Robert Badal, told a news conference, that his party would allot a portion of the revenues from oil to finance a safety net for depressed communities, single parents and the more vulnerable in society. Photo contributed.

GEORGETOWN, Guyana Friday, January 10, 2020 – Guyana’s newest political party – Change Guyana – outlined plans for the country’s oil and gas industry, on Tuesday, with a promise to reopen negotiations on existing contracts, as it pursues a better deal for ordinary Guyanese.

“We will negotiate a better deal over time, on all existing contracts. All blocks, for which investor commitments have not been delivered to date, would be returned to state ownership. There is no speculation anymore on oil blocks,” Change Guyana Presidential Candidate, Robert Badal, told a news conference at the Pegasus Hotel, which he owns.

“These blocks, and all unassigned blocks, would be vested in a state-owned national oil company. Contracts governing these blocks will be royalty-based, with investors subjected to local taxes, just like local companies.”

Badal said good governance, transparency and openness would underline all such arrangements.

He explained that blocks would be auctioned, annually, to realize the highest price, with an attractive signing bonus.

“Every citizen of Guyana will be assigned shares in the national oil company, from birth. Such shares would appreciate in value with every option and every signing bonus,” Badal said.

“Sale of these shares may only be disposed to one’s family or the national oil company. This will give every Guyanese a stake in our oil resources and the benefits therefrom.”

The Change Guyana Presidential Candidate noted that after oil was discovered in 2015, the current administration had two years to seek competent, professional advice from industry players but failed to do so.

This, he said, resulted in “a production sharing agreement that’s perceived to be unfair to our interest”, from oil exploration, development, production costs, exemption from all taxes for oil majors and their contractors, a stability clause that exempt any review or changes, and royalty of a mere two percent share of profits, only after cost recovery. 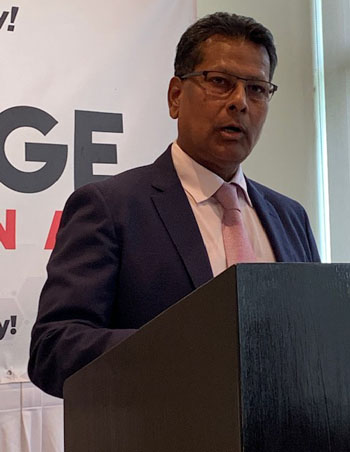 Badal said the production sharing agreement does not include a bond for environmental disaster, which he describes as “a shame”.

“If we have a spill out there, it eliminates our entire fisheries resources and the livelihood of all in this country. Even the signing bonus is very disrespectful – a mere US$18 million as against what Brazil got the other day of $1 billion for similar resources.”

Badal said given that oil resources are finite and will be depleted over time, the management of the revenue from oil and gas is of utmost importance, to ensure sustainable long-term economic and other development.

Additionally, he said, given the history of rampant corruption under the PPP-C and APNU/AFC, adequate controls are vital to prevent misuse, theft and discretionary abuse by any government.

He outlined Change Guyana’s plans for oil revenues as follows:

In years 2020-2022, revenues from oil would be used to uplift the income levels of all employed, through reduction in income taxes, improvements in healthcare, education and urgently needed infrastructural works, including the long-awaited bridge across the Demerara River.

“Our approach is that there are so much urgent things to do right now that we can’t just put it in the Sovereign Wealth Fund. We have to address those immediate needs of Guyanese currently,” Badal said.

From 2023, a Change Guyana administration would activate the Sovereign Wealth Fund as more barrels of oil come online. A portion of annual income from oil would be appropriated to this fund by parliamentary approval. The balance would be appropriated to specific funds – a poverty alleviation fund, an infrastructural development fund, a health-care fund, an education fund and an agricultural and industrial development fund.

“The specific funds are to ensure that these specific needs are addressed, rather than the government vacillating and doing anything that they want to do,” Badal explained.

“The Minister of Finance will only have access to these specialized funds. Any withdrawal from the Sovereign Wealth Fund would require parliamentary approval. This would ensure better planning, transparency, accountability and the best safeguard of our people’s interest.”

Badal said a special allocation to a welfare fund would be made to finance a safety net for depressed communities, single parents and the more vulnerable in society.

“Our focus is development around oil and gas to ensure that after the oil is depleted, our economy is strong, resilient and fulfil our promises to future generations,” Badal said.

“This means developing world class infrastructure – physical in terms of network of roads, highways and bridges that connect all communities; ports and airports; but also, telecommunications and digital, health care, electricity and water.

Badal laments that Guyana remains the poorest country in the region, with a per capita income of quarter that of little Antigua.

He urged Guyanese to pause for a moment to look at the experiences of Nigeria and many other countries, where oil resources have failed to transform the lives of ordinary people — because of corrupt leaders.

“Nigeria produces 1 million barrels of oil per day yet, after 60 years, it has 94 million people (living) under poverty, 57 million lack safe water, 130 million lack adequate sanitation, 10 million children out of school, according to a World Bank report,” Badal said.

“At the root of this all is a culture of corruption, combined with a political elite out of touch with the daily struggles of ordinary Nigerians.

“The questions are – where will our rich oil and gas resources take us? Will we follow the path of Nigeria and neighbouring Venezuela with the same results, or the path of Dubai or Norway? The choice we make on March 2 will determine the direction our country takes,” Badal added.

The people of Guyana will go to the polls on March 2 to choose a new government. More than 600,000 Guyanese are eligible to vote in the elections.