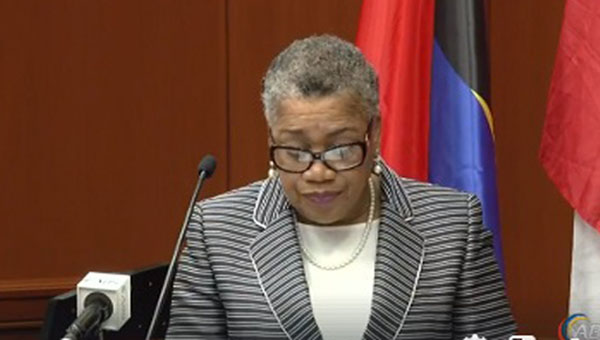 OECS Chief Justice, Dame Janice M. Pereira, said the courts in the Eastern Caribbean have been made to operate “for several months now, without an approved budget and promises not kept".

ST. JOHN’S, Antigua and Barbuda, Monday, January 13, 2020 (CMC) – The Chief Justice of the Eastern Caribbean Supreme Court (ECSC), Dame Janice M. Pereira, today, renewed a call for regional governments of the sub-region to meet their financial contributions to Court, which serves as a superior court of record for the Organization of Eastern Caribbean States (OECS).

“I once more call on the executives of our governments, across the region, to do more than provide lip service support to the Court,” she said in her address to the special sitting, marking the ceremonial opening of the new law term.

The ECSC serves the islands of Antigua and Barbuda, Dominica, Grenada, St. Kitts-Nevis, St. Lucia, St. Vincent and the Grenadines, as well as the three British Overseas Territories of Anguilla, British Virgin Islands and Montserrat. It has unlimited jurisdiction in each member State.

Speaking on the theme “A new era for the Eastern Caribbean Supreme Court: the Road to achieving Court Excellence”, Justice Pereira said the courts have been made to operate “for several months now, without an approved budget and promises not kept”.

“The fact that a little time, just once in the space of a year, to (have to) address funding for the Court seems elusive, and speaks volumes about where the judiciary is pegged — somewhere on the bottom rung of the ladder,” she noted.

“The continued chronic failure to adequately fund the Court prevents the Court from putting strategic plans into action,” she explained, adding that the reforms and enhancements, court processes and procedures, and the addition of new ones “can only go so far”.

“If we fail to appreciate our human resources and if the doors of our courts are closed…our basic facilities fail to be provided for, then our reforms, no matter how well intended, come to nought,” the Chief Justice said.

During the sitting in Dominica, President of the Dominica Bar Association (DBA), Heather Felix Evans, complained at the non-implementation of the Legal Profession Act in the country.

She told the sitting also, that more than two years after the passage of Hurricane Maria, “there is no fixed venue for civil courts”, and added “it is obvious to all, that the absence of a civil court room has dealt a significant blow to the delivery of justice in the Commonwealth of Dominica”.

“Justice has been and is being delayed. The old adage justice delayed is justice denied is most appropriate in this circumstances. Partisan witnesses are getting older, some have died and are dying, some have migrated and, for some other reason are, no longer available and memories are fading or have been completely lost,” she said.

The DBA president warned that “true justice will not be obtained in these circumstances” and contributes to the backlog of cases in the system.