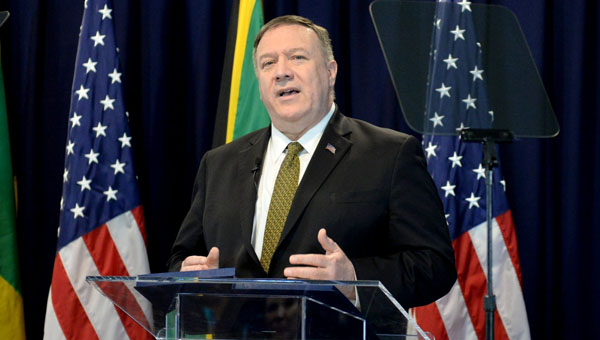 KINGSTON, Jamaica, January 24, 2020 (CMC) – The United States, on Wednesday, urged Caribbean countries to be wary of accepting “easy money from countries, like China”, as Washington sought to improve its decades-old relationship with the region.

US Secretary of State, Michael Pompeo, addressing a policy discussion on “US-Caribbean Relations”, acknowledged that the North American giant had been absent from the Caribbean for a long period.

“I think for too long the United States focused on the Caribbean, only when natural disasters hit. Too many US officials came here to talk about aid, and aid alone. I am not going to give that speech today,” Pompeo told the forum that included the Foreign Ministers of Haiti, St. Lucia, St. Kitts-Nevis, Belize and the host country.

In recent times, Washington has become critical of China’s investments in the Caribbean with many regional states signing on to Beijing’s Belt and Road Initiative, the global development strategy adopted by the Chinese government in 2013 involving infrastructure development and used by the Asian country to strengthen its connectivity with the world.

But Pompeo told the Caribbean foreign ministers and other officials present that “it is tempting to accept easy money from places like China, but what good is it if it feeds corruption and undermines your rule of law”.

He said most of the investments ruin the environment, don’t create jobs for locals, and that there is a better alternative.

“We all know it and we can all achieve it together,” he said, claiming that American firms would provide better alternatives in an environment of “transparent contracts, the respect for the rule of law, honest straight forward accounting practices.

“That’s why I am proud to be America’s Secretary of State and advocate for American companies…coming an invest in places like Jamaica and the region,” he said, noting that some of the businesses attending the discussion “reflect our sincere desire for a partnership and prosperity we can grow all of our nations together”

He said that this is why Washington has launched the Growth in Americas Initiative, with Jamaica, which had been a chartered member during the December kick off and “we look forward to including many more countries”.

He said Washington was working to get more regional countries benefit from private investment and infrastructure and has “created a new development finance corporation (DFC) that works inside our State Department (and) can help your private sector stand on its own”.

He said the US was looking forward to working with Haiti in identifying how the DFC financing can help its economy.

Pompeo said the United States is the largest trading partner with the region, giving as an example, the importation of asphalt from Trinidad and Tobago “which makes up the pavement from Pennsylvania Avenue that connects the White House and the United States capital.

But our economic ties aren’t defined by government aid or remittances from members of your community who come to the United States. We want to build economically, sustainable economies and it is possible”.

He said Washington was also looking to develop the region’s energy sector, adding PetroCaribe, the energy cooperation agreement initiated by Venezuela to provide a preferential payment arrangement for petroleum and petroleum products to some Latin America and Caribbean is “fading into the sunset as the (Nicholas) Maduro regime itself will do”.

Washington has been spearheading efforts to remove Maduro from office and is supporting Opposition Leader Juan Guaido, whom Pompeo said he met during his visit to the region and urged him to convey his thanks ‘to you here”.

“Our sovereignty and security demand that we get even closer today,” he said, noting that prior to arriving in Jamaica he was in Colombia attending a counter terrorism summit.

“Nations all across the region are waking up to the same shared threats and there is no shortage of them. ISIS fighters have come from Trinidad and Tobago. Hezbollah has tentacles all over South America. FARC and ELN take refuge today in Venezuela.

“The man made crisis Maduro has caused in Venezuela has driven an unprecedented migration crisis. Nearly five million Venezuelans have fled his tyranny. Cuba and Russia continue to meddle in nation’s sovereign affairs by trying to destabilise democracies and of course there’s the drug cartels that we deal with and the human trafficking, arms trafficking and cyber trafficking that come alongside.’

This is very different from the times of the Cold War,” Pompeo warned.