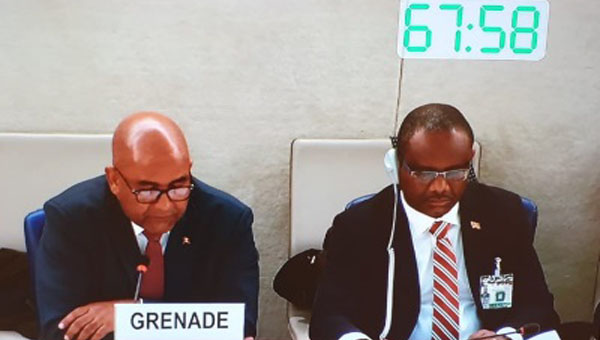 ST. GEORGE’S, Grenada, January 28, 2020 (CMC) – Grenada has given an assurance to the international community, that it will not be executing the lone prisoner, who is currently on death row, nor will it conduct executions in the future.

“The Grenada delegation wishes to advise that this prisoner, in question, has been on death row in excess of five years and, based on the decision of our highest court, this death sentence can no longer be carried out,” Senior Legal Counsel at the Ministry of Legal Affairs, Robert Branch, said, while answering questions and recommendations from various members of the Human Rights Council (UNHRC), during Grenada’s Universal Periodic Review (UPR) in Geneva, yesterday.

Foreign Affairs Minister, Peter David, who is also a lawyer, and is heading the island’s delegation for Grenada’s third UPR cycle, told the session that repealing the death penalty, within the laws of the land, was among initiatives covered in the 2016 failed referendum.

But he said despite the result, Grenada has not conducted an execution in more than 40 years.

“Grenada is a defacto abolitionist state, with a defacto moratorium, with effect since 1978, in addition to this, the Jury Council of the Privy Council, the highest Appellate Court of Grenada, has upheld that the mandatory death penalty is unconstitutional and has continued to place emphasis of the privacy of life,” David told the session, in response to the many states that recommended the removal of the law.

The Foreign Affairs Minister also told the representatives of states, which objected to Grenada having corporal punishment against children on its law books, that removal steps have already started, because the Juvenile Justice Act already prohibited such penalties to children.

“Although Grenada has, in its domestic laws, occasions where corporal punishment is allowed, the government will continue to raise public awareness, in order to discontinue the practice. It is noted that the juvenile justice act of 2012, which deals with sentencing of a child after a finding of guilty by a court, explicitly prohibited corporal punishment,” David told the session, which was broadcast live, here.

Section six of the Juvenile Justice Act mandates that a sentence of flogging or whipping shall not impose on a child. In accordance with the United Nations Convention on the Rights of the Child, which Grenada ratified on November 5, 1990, a child is defined as any person, under the age of 18.

“It is noted also that a complete ban on corporal punishment is one of the recommendations, coming out from the 2018 assessment of child protection mechanism in Grenada, that will contribute to strengthening the prevention mechanism to decease and eventually eradicated child sexual abuse,” David also told the session.

Grenada’s first and second UPR reviews took place in May 2010 and January 2015, respectively, and according to the UNHCR,  the review will examine the national report, provided by the state, as well as information contained in the reports of independent human rights experts and groups, known as the Special Procedures, human rights treaty bodies and other UN entities

UNHRC said the UPR is “a unique process, which involves a periodic review of the human rights records of all 193 UN Member States.”

Since its first meeting was held in April 2008, UNHRC said all 193 UN member-states have been reviewed, twice, within the first and second UPR cycles.