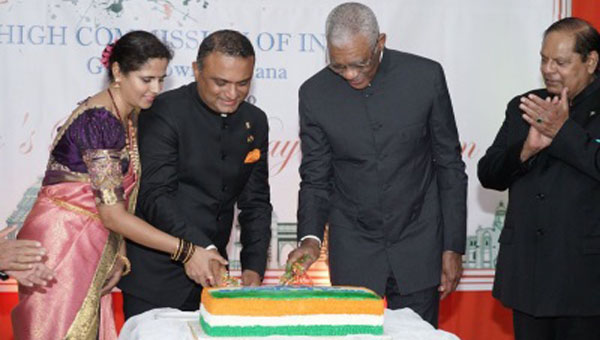 GEORGETOWN, Guyana, January 28, 2020 (CMC) – Guyana has re-affirmed its bonds of friendship with India, since the two countries first established diplomatic relations in 1966.

Addressing the 70th anniversary of the Republic of India, here, on Sunday night, President, David Granger, said Guyana and India had both emerged from British domination in the post-Second World War period, with thousands of Indian indentured immigrants settling in Guyana in the pre-First World War period.

“Guyana and India are united by bonds of blood and history. Guyana and India have strengthened cultural and economic ties, since the establishment of diplomatic relations on 26th May 1966. Our long-standing friendship has yielded mutual benefit for both nations,” President Granger said.

He said that Republic Day in India is a celebration of India’s transition, from a British dominion to a Republic, on 26th January 1950.

Granger said both countries are also collaborating as advocates, for combating the adverse effects of climate change.

“India has been a leader in its commitment to working towards mitigating the impact of climate change at the international level. India’s proactive approach is evident in its role in the establishment of the International Solar Alliance (ISA), focused on the mobilisation of resources to produce cleaner and cost-effective renewable energy,” said President Granger, who attended the founding conference of the ISA in March 2018 in New Delhi.

He said Guyana applauds India’s leadership in promoting solar energy and technology, to bring prosperity, energy security and sustainable development to the peoples of solar-rich countries – the solar belt – of tropical states, particularly in Africa, the Americas and Asia.

“Guyana is moving towards the establishment of a ‘Green’ State, which will place more emphasis on the protection of our environment, the preservation of our biodiversity, the promotion of the use of renewable energy, including through the generation of solar energy, and the adoption of practical measures to ensure climate adaptation,” Granger added.

Guyana’s partnership with, and participation in, the ISA will contribute to the advancement of the country’s Green State Development Strategy, Granger said.

“We have forged a strong alliance,” President Granger said, while noting that Guyana and India concluded the signing of two memoranda of understanding, in 2018, to encourage and promote cooperation in the field of new and renewable energy for mutual benefit and to enhance cultural cooperation.

“Our two governments are working to finalize the first phase on the East Bank – East Coast Road Linkage Project — as we embark on our Decade of Development,” he said.

“India is very happy to strengthen the level of cooperation with Guyana. We all need to work together to think of ways and means to further collaboration between the two countries,” the Indian High Commissioner said.