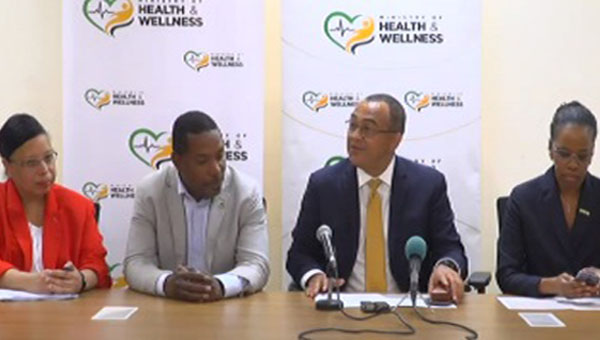 Jamaica's Health Minister, Dr. Christopher Tufton (second from right); Dr. Carl Bruce of the UHWI (second from left); and other officials at the head table at a hastily-called news conference. Photo credit: CMC.

Jamaica Denies Any Case Of Coronavirus

KINGSTON, Jamaica, January 28, 2020 (CMC) – The Jamaica government denied reports, today, of a case of the deadly coronavirus (2019-nCoV) that has been blamed for more than 100 deaths in China.

“I just want to say, categorically, that there is no truth to the claim that there’s a case of the coronavirus at the University Hospital of the West Indies (UHWI,” Health Minister, Dr. Christopher Tufton, told a hastily-arranged news conference.

Rumors had been circulating on social media that one person had been admitted to the UHWI, but the hospital’s Medical Chief of Staff, Dr. Carl Bruce, who also addressed the news conference, said the patent was being tested, based on a travel history.

“The patient does not have a fever over 38 degrees, so they do not meet the case definition for the coronavirus,” he said, adding that “the patient is doing well and will be discharged after testing and investigation are complete”.

Dr. Bruce said that concerns were only raised by medical personnel, because the patient travelled to China on January 7, and out of New York, seven days later.

“The patient was transferred to us from another hospital, and the doctors at the emergency room at the University Hospital evaluated this patient, as we usually do,” he said, confirming that “the patient had a history of travel to Asia, China, specifically”.

“The team, rightfully so, considered whether or not one of the differential diagnosis, as we say in medicine, should be done.”

Tufton said the government has since taken a decision that a travel advisory will be issued, “where persons in China, who are planning to travel to the island, will be advised or asked to remain in China”.

“Where a person, who were planning trips to China, whether Jamaicans or Chinese, we are advising them to postpone, at least for the time being, those travel arrangements that they would have made or are planning to make,” the Minister advised.

Tufton said persons, who are in transit to Jamaica, “our quarantine protocols would be put in place, where persons would either be quarantined in facilities …or within their home environment, depending on the particular circumstances and the risk assessment that would be done”.

He said that the nature of the virus suggests that there is one to 14 days for gestation, “and so the quarantine arrangements would reflect that consideration”.

The Health Minister said that talks have been held with officials from the Chinese Embassy, here, regarding Jamaicans and, more particularly, students in the Asian country, and that “plans are in place, through (the Ministry of Foreign Affairs), to ensure that those persons ….their concerns are dealt with.

He said another meeting is being planned for other key bilateral partners, “where we will have a discussion about this issue and any possible coordination that is required, as it relates to travel, via a third country, from China to Jamaica, or otherwise”.

The Trinidad-based Caribbean Public Health Agency (CARPHA) has issued advice to health authorities, on measures to reduce the risk of importation of the disease to the Caribbean region, as well as advice to Caribbean travellers in the affected area in China.

The World Health Organisation (WHO) said there have been imported cases being reported by the United States and other countries, including Thailand and the Republic of Korea.