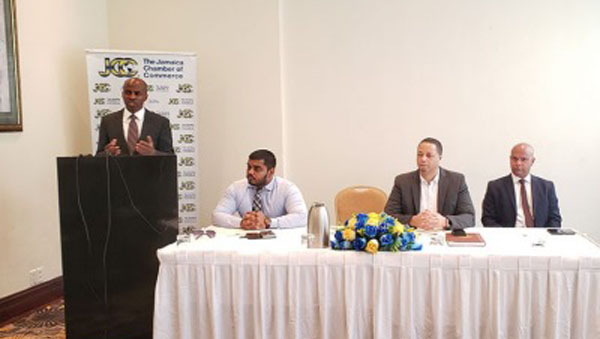 President of the Jamaica Chambers of Commerce (JCC), Lloyd Distant Jr., addressing a forum on "Doing Business in Guyana".

GEORGETOWN, Guyana, Tuesday, January 28, 2020 (CMC) – President of the Jamaica Chambers of Commerce (JCC), Lloyd Distant Jn., says the private sector in his country is seeking to partner with the private sector, here, in expanding business opportunities in the two Caribbean Community (CARICOM) countries, amidst some criticisms of the regional integration movement.

Addressing the opening session of “Doing Business in Guyana”, the Jamaican private sector Leader said, as a country, Jamaica has been used, as a model example by the International Monetary Fund (IMF), to showcase a country that was in a bad position, to one which has low interest and inflation rates.

“Unemployment in Jamaica is at an all-time low, just around 7.2 percent. There is a level of buoyancy. Our stock exchange, in 2018 going into 2019, was rated the number one stock exchange in the world, so with little country risk, with the capital markets booming as they are, we are seeking to expand, externally,” Distant said. 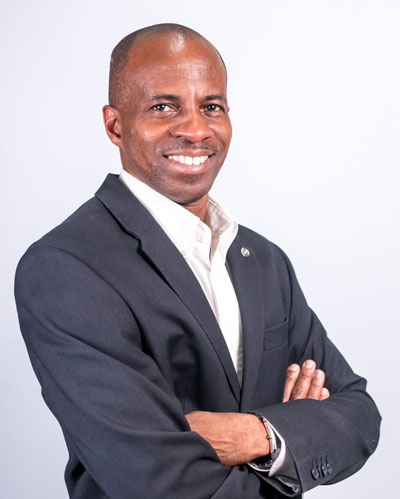 He noted that Jamaica is the most investable country, since there is no restriction on foreign ownership as well as on the reparation of profits. He described the Andrew Holness government as a pro investment one.

“We have one of the most developed capital markets, alongside an independent central bank,” he said, adding that Jamaican companies are looking for external investments, and Guyana has been chosen for that growth and support.

Distant noted that there are now 10 representatives in Guyana on the mission.

“The 10 persons, who are here, represent a multitude of industries, so they are not, in all instances, representing one company. We have a number of persons into technology, managed services, IT security and cloud services; a number of consulting and business support operations, trading and distribution, real estate, manufacturing, as well as legal services, in particular, arbitration and dispute resolution,” he added.

He is predicting a successful outcome of the mission and that another mission, representing manufacturers and exporters, will come, here, later in the year.

“When we first put out the message that we were coming to Guyana, within 24 hours there were over 20 businesses reaching out, saying they were interested,” he said.

Senior Vice President of the Guyana Chamber of Commerce and Industry (GCCI), Timothy Tucker, said the trade mission will enable the business community to have an insight into available trade and investment opportunities in both countries.

“We are heartened to have the companies, represented here from Jamaica, and equally impressed at the diverse range of services that they have brought. Guyana’s new status as an oil producing country will have significant impact on the region and, as such, we believe that this a special, opportune time to work together to further the Jamaica/Guyana economic partnership,” he said.

“The GCCI’s primary objectives are to advocate policies, stimulate trade and investment, connect businesses, sustain economic growth and expand member opportunities. We also have a category of non-resident members,” he said.

Tucker added that the private sector would continue to facilitate inward and outward missions, in order to give Guyanese companies the opportunity to explore regional and international business opportunities.

He said inward and outward missions were spearheaded, over the years, among the United States, Canada and the United Kingdom.

“The feedback received was that the missions were successful, as linkages were forged between companies, and issues of trade were discussed in an attempt to gain mutual understanding of the market and regulations of both parties. During that time MOUs were signed with organisations,” he noted.

Tucker said that Guyana and Jamaica continue to maintain a positive relationship, as Guyana exported US$59.61 million in 2018 to Jamaica, which represented 1.7 percent of total exports out of Guyana.

Ticker said Guyana is a lucrative market for Jamaica and that there are numerous trade and investment opportunities to be explored, between the two countries.

“In 2020, the benefits in linking potential exporters to potential importers, exploring joint venture initiatives and long-term relationships, between Jamaica and Guyana, will remain relevant,” he said.

But the Guyana private sector official said that not enough was being done regionally, “and it’s a feeling that CARICOM is asleep”, given that the purpose of CARICOM is to bring the region together.

He questioned the relevance of CARICOM, since there was no fostering of open relationships between countries, to optimize growth in the Caribbean.

“There are non-tariff barriers placed by member states, even some member states are experiencing economic colonialism. I urge other CARICOM members to take the example [of what exists between Jamaica and Guyana] and the way, over the years, [how they have looked] at each other, and I hope the relationship improves and gets better with stronger ties,” he added.