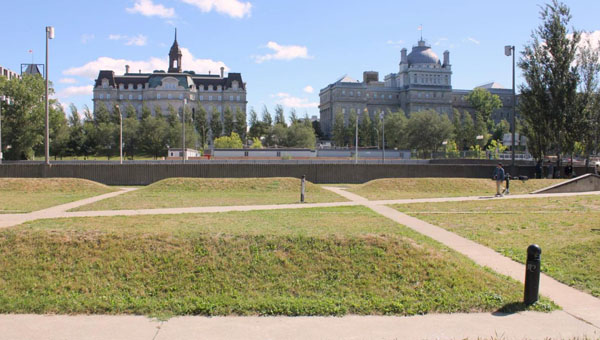 To date, no consensus has been reached by historians, regarding Marie-Joseph Angelique’s actual guilt, or innocence.

On the morning of June 21, 1734, Angelique was in a chamber with a priest, a judge, a physician, a torturer and several guards. There she stood, upright with planks of woods tightly placed on each side of her legs, and felt the pressure on her knees as she gazed at a hammer and iron wedge. Angelique maintained her innocence.

This medieval method of torture, known as the brodequins, crushes bones and knees, leaving the victim unable to stand. Enduring such horrible pain and facing her inevitable death in an unjust court, she confessed.

The excruciating torture continued as the judge persevered, for the name of an accomplice, but she insisted that hers, was a solo effort. Hours later, Angelique was placed in a garbage cart and taken to St. Paul Street, where both a hangman and a noose awaited her.

The trial of Marie-Joseph Angelique immerses us in a world, whose physical environment, political system, economy and social structure are totally unfamiliar to us. The absolutist regime in France had even less tolerance for democracy in its colony, and did not allow freedom of expression.

There were no newspapers in Nouvelle France and, in addition, the import of printing presses was forbidden by the king. Slavery was endorsed by the king and torture was built into the legal system.

The townspeople gathered, some prayed, while others cursed. They all watched as the noose tightened around her neck, and her body lurched forward as the hatch was released. Sunset came as her corpse suspended high for two hours. Her body was then taken down and burnt to ashes, leaving nothing behind, but an unresolved legacy. No one mourned the loss of a Black life, even those, whom she had dutifully served.

Yes, Angelique was dead, had been suspended, not defended, and hung high, on account of a lie. Over the six-week period, the prosecution had called a large number of witnesses, among which no one claimed to have seen Angelique set the fire, but all of whom claimed they were certain that she had done it. No witness tying her to the crime, just being Black and existing in the wrong time.

Angelique originally hailed from Portugal, but somewhere around 1725, she was sold in New England to a Frenchman, named Francois Poulin de Francheville. She was brought to Montreal by Francois, where she worked as a domestic slave.

During the time she was enslaved, she was given the name Angelique by her mistress, Therese de Couagne de Francheville, and gave birth to three children — a boy, born in 1731, who lived only one month; and twins in 1732, who both died, within five months.

The father, listed in the baptismal records, was Jacques César, a Black slave from Madagascar, who belonged to Ignace Gamelin, a friend of Francheville. It is not known whether Angélique and César were lovers by choice, or whether they were forced by their owners to have children (the children of slaves became, themselves, slaves and the property of the mother’s owners).

The gradual process of stripping Angelique of her humanity was increased by the fact that some historians believe that she and Cesar were forced to reproduce, while others speculate that Francois sexually assaulted her.

Today, although Angelique is looked upon as being brave, her masters branded her as being defiant — she cursed, threatened and fought back. An embodiment of determination, she did not request her freedom in a silent manner. Having her rights denied, she caused a ruckus.

In the face of all the known efforts to belittle and control Marie-Joseph, she had a lover, a white, indentured servant, called Claude Thibault. Surprisingly enough, his name was what the judge wanted to hear, when he asked Angelique about an accomplice.

It would not be the first time that Angelique and Claude had become accomplices. A couple of months before the fire, they had run away, a departure that was fueled when Angelique learned that Couagne had sold her to a man in Quebec City. It is also claimed that she was sold in order to separate her from her lover, in addition to her loud and rebellious attitude.

Couagne sought to break down Angelique out of fear, angry that the lovers wanted to depart for Portugal. Angelique was temporarily placed in the home of Alexis Moniere, the brother-in-law of Therese. On February 22, while the widow, Francheville, was still away, Angélique and Thibault attempted to escape to New England, fleeing across the frozen St. Lawrence river and stopping to retrieve bread that Thibault had hidden in a barn in Longueuil, in preparation for their flight.

However, the difficulty of winter travel forced the two to take refuge in Châteauguay, until the weather improved. The taste of freedom lasted two weeks. They were both hunted down and returned — Angelique to her original owner and Thibault to jail.

Thérèse de Francheville found herself totally incapable of controlling the slave, Angelique, and intended to accept an offer by one of her deceased husband’s business associates, François-Étienne Cugnet, to purchase her for 600 pounds of gunpowder. The offer was conditional on the widow covering expenses for sending Angélique to Quebec City, where Cugnet lived. It has been believed that the fear of being sold, and possibly ending up in the West Indies, may have been a factor in Angelique’s attempted escape.

About 10 weeks before the execution of Angelique, Montreal was thrown into a state of chaos and anger. On April 10, 1734, thick clouds of smoke, grey ashes and the fetor of burnt wood filled the streets and permeated Montreal with anger. In totality, 46 buildings, the convent and Hotel Dieu Hospital of Montreal were burnt. There was no fatality during the incident.

Angelique’s struggles perforate Canada’s darker side of history, where slavery, unjust courts and racism lie among the silenced chapters of oppression. Enslavement in Canada was a legal institution that existed for over 200 years. Angelique was brave, bold and loud, and feared by the people around her for those very qualities.

The anger spread, in as quick a manner as the fire burnt the houses, along with an overwhelming need to find a scapegoat. Suspicion around Angelique — an enslaved Black woman, who was shocked and angry at being deprived of her rights — heightened. It had to be her. Who else would set fires to homes and sacred buildings in a foreign land, while menacing the locals? Angélique was charged, tried and convicted by the court.

French law, at the time, allowed a suspect to be arrested, based on “public knowledge”, when the community agreed that a suspect was guilty. The prosecution called a large number of witnesses, none of whom testified to have seen Angélique set the fire, but all of whom claimed they were certain that she had done it.

The witnesses themselves were questionable. Among them was Couagne, her 10-year-old niece; along with her playmate, who had seen Angelique, earlier on in the day; Couagne’s former servant; and a five-year-old girl. Some witnesses claimed that they saw Angelique, on the roof of the house, bringing up coal or heard her threatening to burn her mistress and her house down.

History still has to decide whether or not Angelique started the fire. If she was the culprit, she had the right to do so, after years of enslavement and abuse. She can also be commended for her rebellious act of bravery, if she is the guilty party. The lack of evidence and the corrupt manner, in which the court convicted her, is enough to provoke outrage.

Angelique’s struggles perforate Canada’s darker side of history, where slavery, unjust courts and racism lie among the silenced chapters of oppression. Enslavement in Canada was a legal institution that existed for over 200 years. Angelique was brave, bold and loud, and feared by the people around her for those very qualities.

History will never tell whether or not Marie-Joseph Angélique truly was culpable of setting Montreal on fire. Nevertheless, her story and the people she represents, should not be forgotten.

In 2012, a public square in Montreal, facing City Hall, was named Place Marie-Josèph Angélique — villain or a symbolic embodiment of determination. A story left untold.