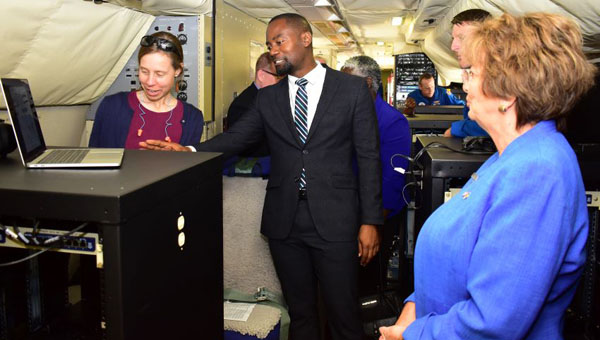 Barbados' Maritime Affairs and the Blue Economy Minister, Kirk Humphrey (centre), and US Ambassador, Linda Taglialatela (right), look on as a crew member of the NOAA hurricane hunter explains how some of the equipment works. Photo credit: C.Pitt/BGIS.

BRIDGETOWN, Barbados, February 3, 2020 (CMC) – Barbados has welcomed the visit of a team of experts, from the National Oceanic and Atmospheric Administration (NOAA), as it acknowledged that science will be a key driver in helping people to understand, exactly what the blue economy is, its benefits, and threats to its continued survival.

The team from NOAA’s Atlantic Tradewind Ocean Atmosphere Mesoscale International Campaign (ATOMIC) is investigating how the ocean and atmosphere work together, to create weather and climate, and will remain on the island until mid-February.

It is envisaged that the research would put the Caribbean in a better position to prepare for natural disasters, during the hurricane season, and would give a better understanding of the blue economy.

“I am hoping the science will help us to understand the blue economy.  The blue economy is about our capacity to live in a world, and preserve the world we live in.  It is about how we are able to protect our marine space.  It is about making the most of it, while not over exploiting it,” said Minister of Maritime Affairs and the Blue Economy, Kirk Humphrey.

He explained that science must become the basis on which decisions are made, and that it must drive Barbados, and the other Caribbean nations, to be able to have information that allows persons to live in a world that is sustainable.

Humphrey said Barbados is in the process of devising a fisheries legislation, presently has a draft Fisheries Policy, and was also committed to establishing marine-managed areas, across the country.

But, he noted, that not everyone was pleased with the way in which the Mia Mottley government wanted to go, as it relates to fisheries management and marine-protected areas. 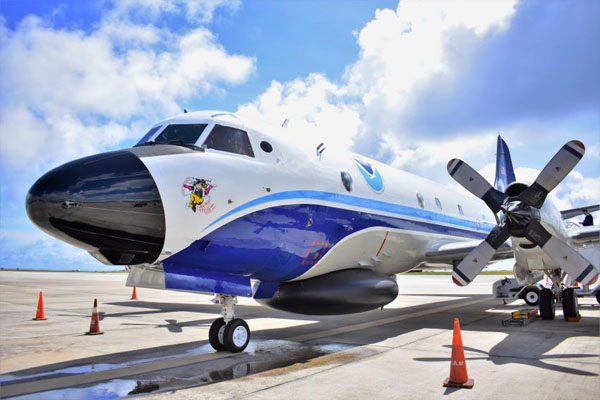 “I want to do it right and with minimal pain.  I am committed to doing it,” Humphrey said, adding that he wanted to continue working with the United States, to build out “a sensible blue economy that would generate revenue and create employment”.

He added that this would include exploring possibilities for coral regeneration, and explained that corals protect Barbados’ coastline from the impact of natural disasters and aids in this island’s capacity to respond to natural disasters.

Assistant Secretary of Commerce for Oceans and Atmosphere and Deputy NOAA Administrator, Rear Admiral US Navy (retired), Dr. Tim Gallaudet, said that one of NOAA’s top priorities was advancing the blue economy.

He added that there was also a detailed fishery management process, which was governed by a Fisheries Council.  He explained that the council was tasked with surveying the fish and conducting assessments to see if they were healthy, and to determine if they could be fished or not.

Gallaudet noted that the beginning of the process was science-based, which also saw “catch fish” limits being established, to allow various species to rebound.

“At present, about 91 percent of our fish stocks are not overfished,” he said, while pledging that NOAA would assist the government, through study tours and other initiatives.

US Ambassador, Linda Taglialatela, said the ATOMIC project was part of the broader EUREKA field campaign in the Caribbean, which was a scientific collaboration between the United States, the United Kingdom and France.

She noted that NOAA’s collaboration with Caribbean partners extended beyond storm and weather forecasting.