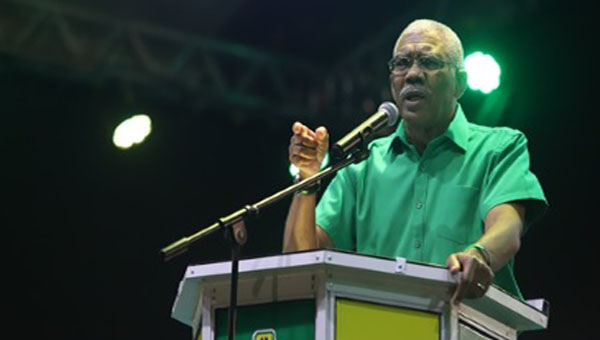 Guyana's President, David Granger, campaigning, ahead of the March 2 elections.

GEORGETOWN, Guyana, February 3, 2020 (CMC) – President, David Granger, promised that former workers of the Guyana Sugar Corporation (GuySuCo), will be given an opportunity to own state-lands, as he announced the establishment of a State Land Resettlement Commission.

Granger, addressing a rally, of the ruling coalition — A Partnership for National Unity (APNU)and the Alliance For Change (AFC) — on West Coast Demerara, last Friday night, said the State Land Resettlement Commission will give the ex-sugars, who were affected by the downsizing of sugar estates, another chance in earning a living.

“We are going to establish a State Land Resettlement Commission, so that persons, who have been out of work, because they have been in the sugar plantation, will be given access to lands, so that they could start over again.

“Those who want to farm, will be able to farm; those who want housing, will get land for housing,” he told supporters.

The Wales sugar estate, on the West Bank of the Demerara, was one of four sugar estates that the coalition government closed, over the last few years.

“We did not do this, uncaringly. We know the problem. Sugar cannot be sold on the world market at the cost that it is being produced at Wales. But we did not throw Wales under the bus. We amalgamated Wales with Uitvulgt. And many of the persons in Wales have gotten jobs in Uitvulgt,”Granger said.

He said his administration had to make a “difficult decision, but we thought hard and long”, especially since the industry needed to be preserved and protected.

“We are not leaving the sugar workers on their own. We care for workers. But we cannot continue to produce sugar at that cost. Sugar workers will be able to go on to those lands and to use it for any purpose of their choice.”

Granger also said that the government would be establishing a National Squatters Settlement Commission, on March 15, in a bid to end homelessness and provide adequate housing citizens.

He said the Commission, which will come under the Ministry of Communities, will, in effect, target squatters’ settlements, which the Head of State noted, remains a huge problem across Guyana.